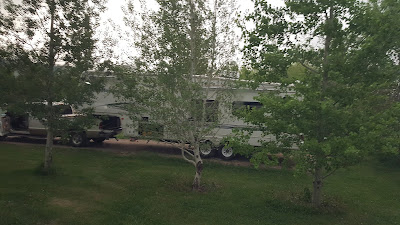 Our neighbor between us and the boat launch ramp is leaving this morning.... 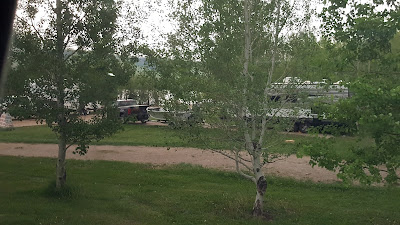 .....and he is gone...we now have a partial view of Henry's Lake through the trees

Saturday began nicely enough, but by mid morning the wind had risen, and just before noon it was obvious we would have to stow our awnings, so we did.  Since rain was coming early Sunday morning I began to put away everything (chairs, anti gravity chairs, fireplace.....you know....all the stuff that makes me happy) in preparation for our departure from Bill Frome County Park Monday morning.....yup, it's time to change our view once again.

I've been wanting to switch out the OEM threadless stem that came with my Haibike as it is only 2.5" long and I always feel like the handlebars are too close to me when I am riding, or just standing over the top tube.  I've had an extra 3" stem for some time that I wanted to replace the short one with, but have been lazy about doing it.  Since the wind was keeping us housebound anyway I decided to fire up my Honda 2000 generator to power the trailer and make that switch...... 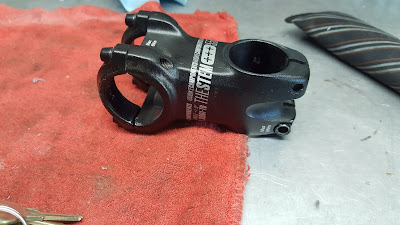 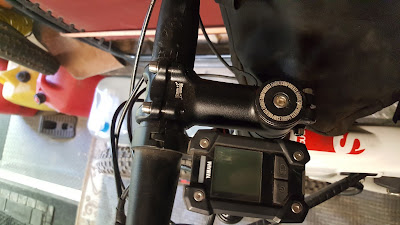 ......I know .5" longer does not seem like much, but it feels worlds different.  The rule of thumb when making any adjustments to your bike is to make them in small increments, as a small change can make a big difference. I think I will try to find a 4" stem in the near future, but for now the 3" one will do.  While I was swapping out one stem for another I plugged in the Haibike battery to bring it back up to 100%, and by the time I was done with the stem the battery had been recharged, and is ready for another foray.

The rest of the day was spent inside out of the wind....I could never live for long in a perpetually windy place as the constant wind just wears me down mentally.  I know many people live where wind is the norm, but I could not do it.  I've begun to read some new westerns written by two new authors, Elmer Kelter and William W. Johnstone, and spent part of the afternoon reading, and napping.  Around 5 pm TLE and I began to watch a Netflix series (streaming) entitled 'Shooter'.  This series is produced by Mark Wahlberg, who starred in the original 'Shooter' movie.  There are three seasons available, and 10 episodes in the first season.....we managed to binge watch all 10 episodes of the first season before we headed off to dreamland around midnight.

We'll ride out the forecast rain for Sunday, and be ready to roll our wheels Monday morning for Bozeman, MT.....stay tuned.

When you shop Amazon, please use our link (below) to access their website.......we will appreciate every purchase you make using our Amazon Affiliate link, and  remember, using our link will not add one penny to your purchase, plus we will receive a small commission which over the course of a year adds up to enough to by a tank of diesel for which we thank you very much!
Posted by Whatsnewell at 7:37 AM