Sunday was to be a warm day....not quite 90° F, but it felt much warmer.  By 11 am we had the A/C in the bedroom running to cool, and dry the interior air of the Newell.  Around that time TLE went outside 'cure' her new Cowboy Disc Wok by first filling the wok with water, then bringing it almost to a boil, and then letting it simmer for about 10 minutes.  Once that was done she poured off the water, and then using a cloth rubbed the steel cooking side of the wok down with salt for a period of time, then filled the wok with water once again, let it simmer for another 10 minutes.  The final step involved pouring off the water once again, then slicing some animal lard into the wok, let it heat up to where it begins to smoke, then add more lard, let it heat up again until it begins to smoke, the turn it off and let it cool down.  Once it had cooled down she wiped it clean, and it was pronounced 'cured'.  Monday morning she will cook breakfast in it for the first time.

While she was so engaged I decided we needed to put up our sun shade, and end piece as we get sun on the lido deck all day long as we are facing almost due east.  By the time it was in place, and staked down it was closing in on noontime, and I was hot, and sweaty....time for a nap in the cool confines of the Newell...... 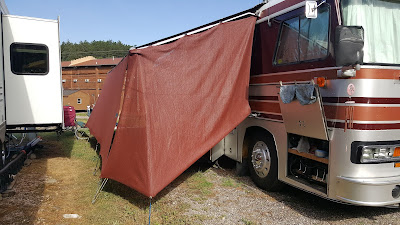 ....around 4 pm I walked over to the convenience store to help out Rich and Marnie by stocking the cooler, 'fronting' all the floor merchandise, checked the restrooms for cleanliness, emptied the outdoor trashcans (5 in all) in front of the store, and next to each gas pump.  It being a Sunday the foot traffic was not to great, but it was steady until I headed home around 6 pm.....another 'grueling' day here in Keystone, SD.....lol.  My arrangement with the store manage, Beth, is that I will donate about 15 hours each week we are here in exchange for our full hookup site....seems reasonable to me, and especially nice that I spend 90% of my time inside the air conditioned store, and about half that inside the very cold cooler restocking beer, and other beverages.

As I exited the store around 6 pm I noticed it had clouded over, and the temp had dropped significantly as the pictures below illustrate...... 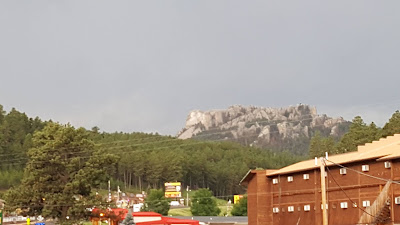 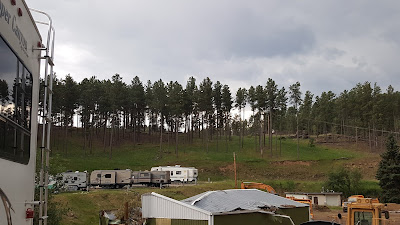 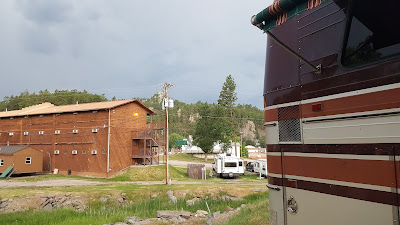 ....within 90 minutes we saw flashes of lightning, then heard thunder, and then rain upon our roof, which turned into golf ball size hail (maybe slightly smaller than that, but not by much) which startled us as it slammed into the roof of the Newell.  I was especially concerned with the plastic cover for our Fantastic Fan......I thought it would explode at any time letting water into the kitchen, but it held fast, and we remained dry.  It seemed to go on forever, but probably only lasted less than 10 minutes.  It appears we suffered no damaged to our solar panels, or to our VW.  In over 8 years of traveling this is the first significant hail we have experienced....thankfully...... 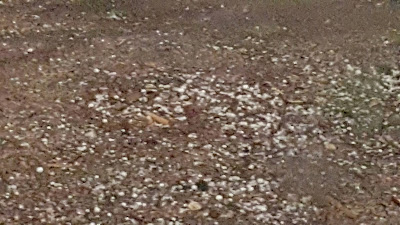 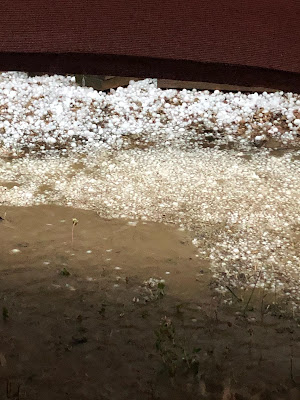 .....the storm passed quickly, and within another hour it had stopped raining, and the skies began to clear.  Once we get by the current mini heatwave we'll get out and do some more exploring.

Posted by Whatsnewell at 7:47 AM