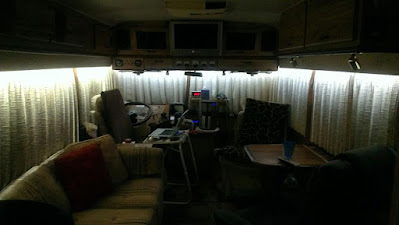 The main reason we came to Echo Lodge Resort for 3 days was to get together with Steve Ward whose expertise in all electrical issues is unparalleled.  Whenever I get stymied with an electrical issue I call him.  We last saw Steve back on January 30th of 2017 when we were dry camping on the Parker Strip at Crossroads BLM Campground.  He and his wife, Patti, were at their usual winter location at Echo Lodge Resort, where they are again this year.  Steve and I talk on the phone several times a year.
Well, Thursday was the day he was going to help me troubleshoot our electrical issue with the outlets in the TV cabinet and in the through bay.  He arrived around 10 am and we got immediately to work.  Steve has his own process that he follows faithfully, and that is why he is so good.  Every time I am with him I learn something I didn't know before.
Over a period of 4.5 hours after having put his hands on virtually every single piece of Romex in the coach, and many continuity tests Steve slowly narrowed his focus to the wire chase access point in the bathroom.  Contrary to what I wrote a few days ago, there are actually 5 Romex lines running through that section of the wire chase....I, somehow, missed one the other day, and it was the one for which I was looking....circuit #4.  He stripped the insuallation of of the Romex, then off the black wire within that Romex line, then we ran a 30' wire to the front to test the continuity of the wire from the dead plug to that point in the bathroom....the result was we did have continuity to that point.  Steve likes to break the circuit down into sections to find the short.  Eventually we moved into the wire chase in TLE's closet where we still had continuity to the front, so the short must be between that point and the main electrical service on the other side of the hallway in my closet, and that is exactly where we found the short....it was in the ceiling above the hallway between the two closets.....VICTORY!
Trying to pull a new wire through that ceiling would be difficult, and time consuming, so we decided to follow Steve's advice and just tap into the Romex wire which supplied power to the outlet in the Norcold bay.....that outlet is the only thing on circuit #3, and it is never in use as we run the Norcold off 12 volt, not 120 VAC.  Once Steve finished soldering the new connection we had power restored to the TV cabinet, and through bay....the time....2:30 pm.  After 4.5 hours of troubleshooting all it took was a 3' length of wire to restore power.  It is difficult for me to describe the feeling of pure elation and gratitude that swept over me.
While Steve took a break I spent the next 90 minutes putting the coach back together....we had 7 wire chases open, and the wiring to four outlets disconnected, plus all the clothes needed to be put back in their respective hanging closets.  While I did this TLE and Steve talked.  Had I had to hire an electrician to do what Steve did would have been very expensive, but the only compensation Steve requested was that I gift him the old Stewart-Warner tachometer (his has been acting up) I removed a year ago when I installed the new Speedhut digital tachometer (which I intended to give to him anyway) and a brew.  While I continued to finish putting the coach back together Steve when home for a while, but returned around 4 pm for the beer and more conversation.
Except for the fact we both own 1982 Newells one serial number apart I would have never met Steve 13 years ago.  He is the kind of guy I would be friends with anyway, but it was the Newell connection which brought us together, and for that I will be eternally grateful.  As a result of Steve's efforts we will not have to run a new Romex line, and have now removed the shorted piece of wire from use......all of which will save us a lot of work.
The birthday of our Newell was March 1, 1982, and in just 6 weeks we will celebrate her 40th birthday.  She has just over 180,000 on her engine and chassis, and is still going strong after 11 years of full time living.  Ironically, we took ownership of her on March 1, 2008 on her 26th birthday.  In the 14 years we have owned her (and around 77,000 miles) this is the first 120 VAC issue we have had, which is a testimony to how well she was built 40 years ago.
Thanks for stopping by!
When you shop Amazon, please use our link (below) to access their website.......we will appreciate every purchase you make using our Amazon Affiliate link, and  remember, using our link will not add one penny to your purchase, plus we will receive a small commission which over the course of a year adds up to enough to buy a tank of diesel for which we thank you very much!
Posted by Whatsnewell at 8:45 AM