I woke up early thinking about all that had to be done before we moved our Newell and trailer for the first time in over 5 months.  If you have been following me for a while you know that in spite of having almost 9 years under my belt Newellwise I still fret about moving whether it has been a few days, or months.   I know in my heart that I have done my due diligence maintenance wise, and make sure everything is up to par on a regular basis, but I still worry about the unknown.  I have to say though that this time around my level of anxiety about the unknown did not overwhelm me for a change.  I just went through a mental checklist of everything which needed to be done before we could roll our wheels to move over to Section G, site 167 for the final weeks of our stay here at TVC this year.

We waited until after 9 am to begin working outside as it was just too COLD.....until then TLE and I spent time inside getting things stowed away so we could roll.  I figured we would be ready to move by noon time if all went well.....and why shouldn't it?

We worked steadily taking down the decorative lights, putting away the solar lights, pulling up our various mats, rolling up the artificial turf, putting tarps over our still enormous pile of wood, disconnecting the water, sewer and electric connections.......finally we were read to move at 11:45 am......we love it when a plan comes together!

Before we moved we drove the Ranger cart over to site 167 to check out how we would get into the site.....some of the sites in this row can be used as pull through sites when the site behind is unoccupied, and 167 had that potential, but ultimately we decided, together, that we would back into the site.

By 12:30 we had the coach in site 167, had the DirecTV connected (we chose 167 to move to as it is one of the very few sites which gets satellite TV),   and then began the abbreviated setup for our last few weeks here at TVC.......it makes no sense to deploy all our decorative lights again for just a few weeks.... 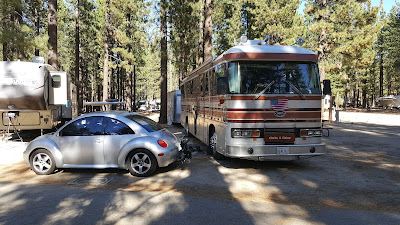 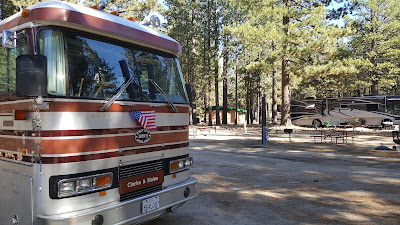 The Section G bathroom in the distance.....that means the dumpsters are much closer!

So, you might be wondering why we 'had' to move so soon.....after all Miguel (head ranger) will be in his site in E until around the 17th.  Well, here's the deal.....for the past three years we have wanted the ancient, crumbing concrete table in our site removed as it is just in the wrong spot for our rig.....a portable picnic table would work much better.  Since we are the only ones who occupy that site it only makes sense to rearrange it to work better for us.  In addition we would like to get the rear of our site a little more level.....right now it slopes a lot from back to front meaning we have to elevate the front of our Newell a lot to get level from back to front.   In order to get these things done we need the services of Alex who is the only guy who knows how to operate (competently) the CASE front loader.  Alex's last day here at TVC this year is Friday so the work needs to be done before then, obviously.  Hence our early move to site 167.

After I finished setting up in our new site I took a long, hot shower, and then proceeded to take a deliciously long nap.  By 5 pm I was recovered from 'moving day' and ready to watch the San Francisco Giants vs. the New York Mets National League Wild Card game.  It was a well pitched game ultimately won by the Giants on a 3 run homerun in the 8th inning.

Thanks for stopping by!
Posted by Whatsnewell at 8:30 AM