Monday began cloudy and blustery, and remained so all day long.....it was the kind of autumn day I love......just cold enough to require a long sleeved shirt, but warm enough to have the trailer door open as I worked on a friend's Marin titanium frame, hard tail mountain bike.  It was the perfect project for a Monday where I didn't have much planned.....TLE went into the office, but I was still off work until Tuesday.

Eventually, when I was about half way through tuning up the Marin bike, I got a radio call from TLE  (I am 'on call' Mondays) that there was a possible electrical problem at site 182, and another customer (site 163) needed a rock rake and shovel to fill in some low spots in their site.  So, I got dressed, drove over to the office to clock in, then took care of delivering the yard tools to 163, and by the time I got to 182 they had solved their electrical problem, which, apparently, was not our issue.  Since I was getting paid for a minimum of 2 hours I went ahead to took care of a few things left over from Saturday......a vertical sewer vent pipe had been blown over in Section 'E' by the high winds during our 3 day storm a week ago, so I fixed that and then finished picking up trash along the fence line in the storage/maintenance yard.  Once that was done I headed back to the trailer to finish tuning up the Marin bike.

TLE called again on the two way radio to let me know the unpleasant lady in site 129 (the one who arrived with her family of 10 at 3:15 am the other morning and yelled and cursed at me when I asked them to turn off their engine after 30 minutes of maneuvering which woke everyone up) had come into the office to complain about me.....this is a classic example of 'projection'......she accused me of being rude, yelling at her, and using profanity......which is precisely, to the letter, what she did.  I was polite, addressing her as Ma'am and her husband as Sir, and said 'please and thank you'.....I don't use profanity, and everyone here can confirm that, and I don't yell at people.  At any rate her complaining fell on deaf ears.

TLE was off work by 4:30, and then drove over to Raley's to stock up on a few things for me while she is gone (by the way, she is leaving Wednesday, nor Tuesday.....yay for me!), and then we headed out for what we thought would be 'Taco Monday' at Classic Cue, but they were packed......there were no tables or bar stools available, so then we thought we would drive over to Sidellis Lake Tahoe Brewery for some brews and dinner.  We arrived there 10 minutes later to find them closed for a month to do some maintenance and upgrading......drat!  Then TLE said, "Why don't we go to Coldwater Brewing for dinner....we haven't been there all summer"......brilliant.

On the way back to Coldwater Brewing I stopped briefly at El Dorado Beach to take this shot of Lake Tahoe...... 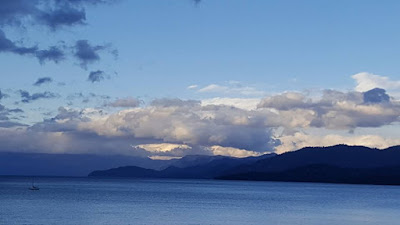 .....only a few sunsets left in our sojourn in SLT......it seems weird that in just a few days we will be headed for new sunsets.

As it turned out Miss Serendipity must have had her hand in our dinner choice as we were pleasantly surprised in the upgrades to their menu.  Don't get me wrong, they had a good menu before, but the minor changes they have made put them over the top.  We both ordered pints of their Stillwater Stout, and an appetizer.....bacon wrapped, cream cheese filled dates.....YUM!  TLE had the CW Burger, and I the Fish and Chips, which we split.....everything was perfectly seasoned, and delicious!

While we were sitting there at one of their window tables I saw the aforementioned nasty lady and her family drive by towing their trailer......they pulled into the restaurant across the street ('Scusa') for dinner, apparently.  Why I mention this is the following.......they paid for their first two nights at TVC (Friday and Saturday) but had not yet paid for Sunday, and Monday.....they claimed they were talking to Dan (Thousand Trails guy) about a membership, and usually we stop charging until that is resolved.  Interestingly, we do not believe they signed up, and now we see them leaving under the cover of darkness not having paid for their last two nights.  Then it hit me........I suddenly exclaimed......"I bet they are gypsies" (aka: Travelers)......this what they do.  How do I know?  Well, when we were camp hosts at Jurupa Regional Park for a year in Riverside, CA we had a lot of gypsies comes through.  They all had the surname 'Miller', always had brand new trucks, and travel trailers as well and 8-10 people.  They were always trying to get over on us, and it was usually the women who led the charge......complaining about everything in an effort to get their stay 'comped', or sneeking in after hours and leaving before the office opened in the morning.  I don't know this for sure, but we shall see, right?

We were home by 6:30, and I finished watching the Denver Broncos vs. Houston Texans (in Denver).....Denver won handily 27-9 snapping a two game losing streak, so order is restored in my football world.

The World Series between the Cleverland Inuits and Chicago Cubes begins Tuesday......this is one of my favorite times of year!

Thanks for stopping by!
Posted by Whatsnewell at 7:54 AM