Sunday was a very relaxing day for moi......TLE had to open an close the office/store as there is no one else to do so on the weekends anymore.  I had the day off, but was 'on call' as there is no one else to pump propane who lives on site.  I am also off today, Monday, and am also 'on call' today for the same reason.  At any rate for the third successive Sunday I watched parts many NFL games on my NFL Sunday Ticket via DirecTV.  Regretfully, only two of the teams I was rooting for won their games (Raiders and Cowboys), and on top of that my Dodgers lost 5-2 to the Washington Nationals.  Nevertheless, I thoroughly enjoyed Sunday.....I even took time to clean the front windshield and some of the windows on our eastern exposure (driver's side) so I could more thoroughly enjoy the outdoor views.

Around 3 pm I got a call on my two way radio (I was 'on call' so I have a radio with me all the time) to pump some propane so I got dressed and drove the Ranger cart over to the propane station, and since I was now temporarily on duty (minimum of 2 hours paid when I have to clock in on my day off) after I pumped the propane I drove out Melba Drive to see if my repairs from the day before were still holding, and found everything untouched.  However, on my way back north I found a 10 foot section that had been pushed  down by a black bear the night before......this was part of the 200' of fence that had been missing for several years, so fixing that gap apparently has disrupted a bear route through our campground.  I went ahead and fixed it, although with mixed emotions, as no doubt the bear, or bears will return again expecting the path to be open......we'll see.  I was back home watching football by 4:30....... 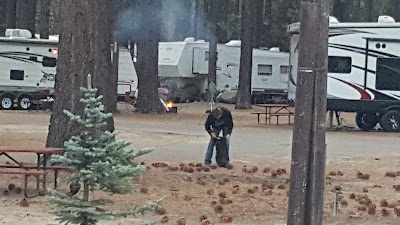 .......at some point I glanced out the window by my recliner and saw a guy collecting pine cones and saw the fire going in the back ground.  Speaking of pine cones, we the trees have been dropping pine cones by the bushel basket the last two weeks.....someone told me that this is portends a wet winter.......I hope so, California and Nevada need another wet winter.

TLE was home just before 5:30......just as the Sunday Night NFL game was beginning between the Packers and Giants.....the Giants stank, and the game was not really very interesting, but a bad NFL game is always preferable to the Presidential debates.....at least I don't feel like I need to take a long, hot shower after watching an NFL game.

Posted by Whatsnewell at 9:21 AM