I didn't go to work until 10 am as it was just too cold for the work I planned to do Friday.....I forgot to mention in my blog entry about Thursday that I got approval to buy 350' of welded fencing on Tuesday to replace some bad sections along Melba Drive, and to replace completely 200 some feet of missing fence.  Adam and I drove over to Scotty's TruValue Hardware store to pick up the fencing I had ordered on Tuesday.

I clocked in and drove  down to the maintenance yard to pick up the fencing and headed out to the very end of Melba Drive where our fencing meets the airport fencing.  At the point where Melba Drive 'DEAD ENDs' there has been a hole in the fence where some folks have been driving vehicles in to camp illegally, building illegal campfires on the ground, etc.  I attempted to close this up near the end of the 2015 season, but returned this year to find the fence cut again and the hole bigger than ever, so that is where I began my day.... 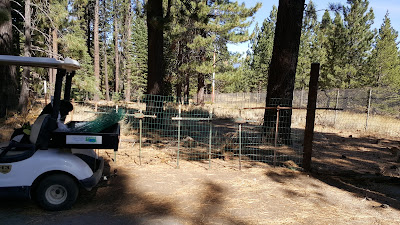 Where the large car sized hole 'was' 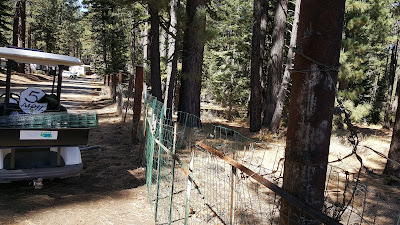 .....I spent over an hour cutting out the crushed fencing and barbed wire, and then closed the 20' hole with new fencing and many more metal posts......I still have some more work to do to make sure that section is not breached again, and I will take care of that Saturday.

Next up I moved northward cutting out another crushed section and replacing it with new fencing and posts.  Finally I got to the section where 200' of fencing was completely missing, and has been missing for the last three summers.....how long it has been missing I have no idea, but Friday was the day it would be closed up once again. 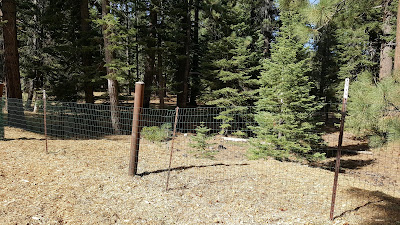 The beginning of the 200' missing section 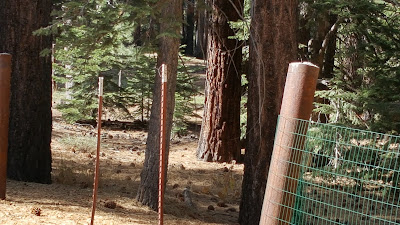 About half way there! 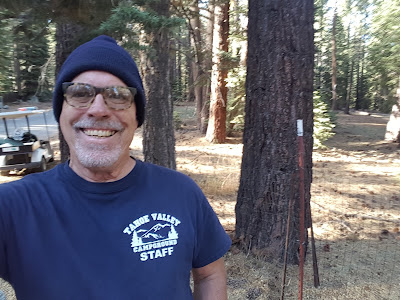 The last hole in the fence is closed!

I began repairing some of the large holes in the Melba Drive fence last summer, but it was more like putting small bandaids on the problem.  This summer I began in earnest to really fix the fence, and finally got approval to buy some fencing to do the job right.  I wasn't sure I would get it all done until this past Tuesday when I got the approval.  So the big smile on my face is because my dream has been realized.  For the first time in years there are no holes in the fence!  How long that will last no one knows, but now we can just react as we find holes, and fix them quickly.

By the time I got home I was dirty, beat and suffering from a few barbed wire cuts, which TLE quickly attended to......it's a good thing I got a tetanus shot last summer when I almost cut off the end of my left middle finger!

After taking a long, hot shower I settled in to watch the end of the first Dodger playoff game against the Washington Nationals which was won by the Dodgers 4-3.  Then I watched the Cubs (haven't won a World Series in 108 years) outlast the Giants 1-0 on an 8th inning solo homerun.....excellent!  Yeah, like any loyal Dodger fan I still hate the Giants.....:-)

Thanks for stopping by!
Posted by Whatsnewell at 8:22 AM