I spent about an hour transferring my 'rough draft' tax figures to the IRS and Franchise Tax Board forms so I can mail them in by Thursday.  After everything was printed and ready for signatures I got dressed and reported for work about 10:30 am.  My self assigned task for the day's work was to take advantage of the warm, sunny day to do some street painting.  About a week ago, or so Alex had repainted the white parking lines in front of the office/store and it was time to repaint the handicapped lines and graphics.  In all it took me about 2 hours to refresh the handicapped parking spots, and I think they turned out pretty good....... 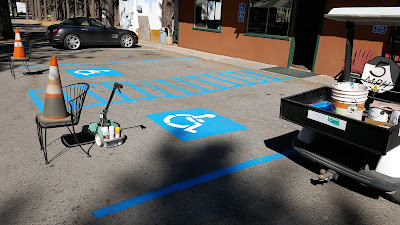 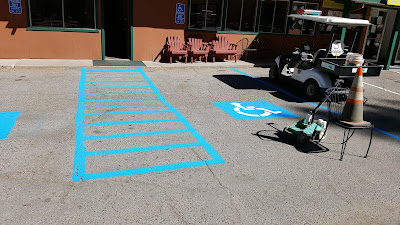 .....I neglected to get 'before' shots, but they were so faint you could hardly see them anymore.  I think it has been at least 3+ years since they were last refreshed....... 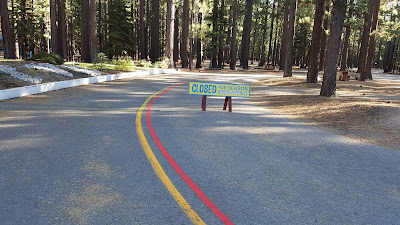 .....then it was time to refresh the color coded lines we have going to each of our four campgrounds.....yellow takes you to 'E', red takes you to 'A'.  Since we have closed 'E' and 'A' I put up the 'Closed for Season' sign, and got to work.....since there will be no snow plowing, or vehicle traffic this winter this is the perfect time to take care of this......it will be one less thing we have to do next Spring.  I'll wait until Spring to refresh the white (to 'G") and blue (to 'F') lines as there will be snow plowing and traffic this winter over those lines. 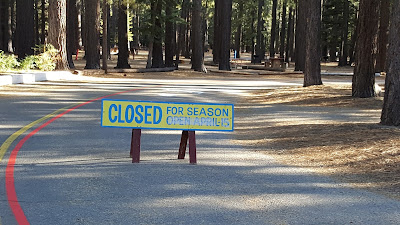 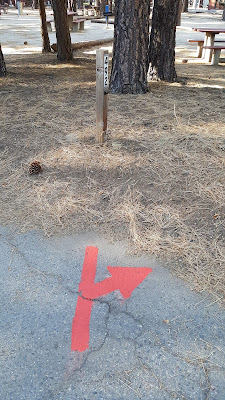 By the time I had finished two of the tent site arrows it was time to clean up my painting tools, and clock out for the day.  Having been a house painter in college I know how important it is to clean up your brushes, rollers and roller pans so they can be used again......it took me about 30 minutes to finish the cleanup.

I was home before 4:30 pm....TLE had reported for work just after 1 pm as there were two people in the office in the morning....she stayed until after 6 helping Ben learn how to 'close'.

I forgot to write about some of our beer discoveries over the past few weeks.....when we were at Dart Liquor a couple of weeks ago TLE picked out this seasonal brew called 'Black Pumpkin Oatmeal Stout' (Buffalo Bill's Brewing, Hayward, CA) .....I'm always a little suspicious about these type of seasonal brews, but was totally blown away by this 22 ouncer!  We had this one with dinner a few nights ago....it is only available from July to October each year, but it is definitely one to check out. 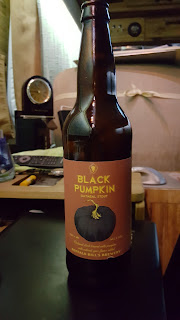 Yesterday when I got home I was hungry as I hadn't had lunch so I went to our Norcold refer to see what I had brewise, and I found this 22 ouncer I had forgotten about.....I believe Brian Devine of 'Roaming Pint' gave this one to me a couple of months ago.......it is a 'Salvator Double Bock' by Paulenar Munchen out of Munich, Germany......what a pleasant surprise....thank you Brian!  I poured a bowl of roasted peanuts and chased them with this brew! 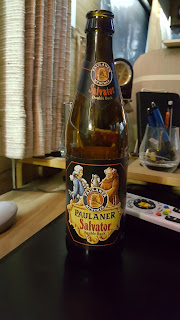 TLE made Fajitas for dinner which I chased with an 'IKY IPA'.....those were the spiciest Fajitas I have ever had.....I think my forehead is still sweating!

I watched the end of the Dodger vs. Nationals game won, ultimately, by the Dodgers 6-5 to tie the series 2 games apiece and send it back to Washington D.C. for the fifth and deciding game Thursday.  The nightcap was the Cubs vs. Giants.......this was a thriller!  The Giants led 5-2 beginning the top of the 9th inning and needed just 3 outs to tie the series up 2 games apiece.....for some inexplicable reason the Giants manager, Bruce Bochy, took out the starting left handed pitcher who hadn't given up a hit since like the 5th inning and was still 'blowing them down' in the top of the 8th.....well 5 pitchers later the Giants lost 6-5, and are now on vacation until next Spring.  There have been 828 post season games in MLB history where a team went into the 9th inning leading by 3 runs or more.....in only 4 cases did that team lose (including yesterday's game)....the team leading by 3, or more runs won the other 824 times!  I'm reminded of a famous Yogi Berra quote (played for the Yankees and also managed them)......"It ain't over till it's over".  Here's hoping my Dodgers can win Thursday and meet the Cubs in the National League Championship Series!

Thanks for stopping by!
Posted by Whatsnewell at 8:46 AM