'Going to the dogs'

I began Thursday with plans to finish painting directional arrows and site posts in Section 'E', but I get ahead of myself.  TLE headed off for work around 9 am, and I followed half an hour later.....no point in going in too early as it is just too cold to do much outside.  After 'clocking in' I headed to the maintenance yard to pick up the 'ash can' to pick up some ashes/coals which were on the ground in site 102, and then drove around the park once again to see if I had missed any other piles, but I think now I've gotten them all.  By this time it was after 10 am and warming quickly so I headed back to the maintenance yard to dump the ashes/coals then pick up my panting equipment.

Adam, our maintenance manager, was there and began to talk to me about my plans for the 'Dog Park' in Section G......our manager, Robert, has wanted a dog park built since the middle of the summer, but it never got done, so I had offered to do it several weeks ago.  I've acquired serious fence building skills this summer, especially after replacing some 300 feet of fencing along Melba, so I thought I could do a good job in a short period of time.

Section G was chosen for the 'Dog Park' as the amount of fencing required to close in the northwest corner of Section G is under 200'.  Basically all we had to do was close the triangle with one 200' length of fencing.....the rest of the boundary is already there, and I had worked on fixing the holes in it several weeks ago.

So, there you have it......in just a few minutes my whole focus for the day was changed and while Robert went over to Scotty's TruValue Hardware to pick up another 50' of fencing I proceeded to pick out 20 steel posts and head out to the northwest corner of G to pound them into the ground in preparation for attaching the welded steel fencing (some here call it pig fence).  Just as I was finishing the placement of the 20th post I heard Robert on the 2-way radio announcing he was back with the fencing so I headed for the maintenance yard to get it, and then returned to my task. 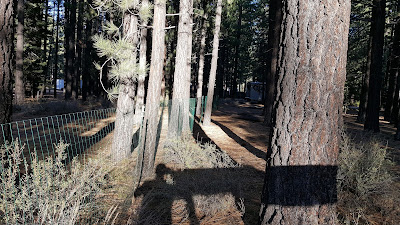 Looking west to east along the fence line 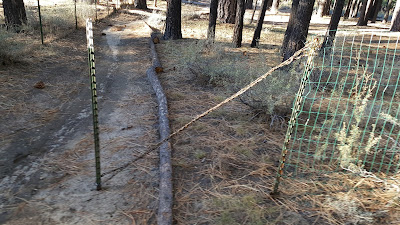 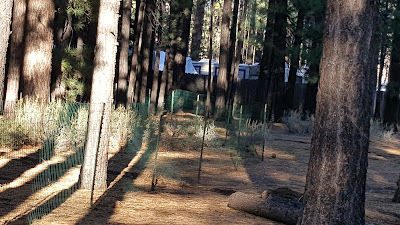 The east end of the fence is anchored to the storage yard
fence, which you can see in the distance.

In all it took me 7 hours to build the fence, plus fix another hole in the fence created by people too lazy to walk around to the entrance.  We have to be sure the holes in the north end of the fence stay closed, or else dogs will be able to get out......after all the whole point of a 'Dog Park' to allow dogs to be off the leash.

This is the first day I have worked 7 hours in a long time, but it seemed to just fly by Thursday.  I love working on projects like this by myself as I can just lose myself in the work.  I think it came out really well.....all I need is about another 5 feet of fencing to close the last gap before the gate.  I'll probably work on installing the gate Friday, and we should have the last 5 feet of fencing next week sometime.

I got home just as the MLB NLCS game between the Trolley Dodgers and Cubes was beginning......the Dodgers kept it close until the 7th inning when the roof, once again, fell in on them.....they ended up losing 8-1....another blow out.  In the games the Cubes have won they have averaged almost 9 runs per game, but in the two they have lost they have scored ZERO runs.  Kershaw will pitch in Chicago Saturday, and Rich Hill will pitch on Sunday.....I hope it goes to game 7.....we'll see.

Thanks for stopping by!
Posted by Whatsnewell at 9:00 AM