In SoCal when we get a late heat wave in the Fall we call that an 'Indian Summer'......so, I'm wondering, if you get an early winter storm in the Fall in the Tahoe Basin would that be called an 'Eskimo Winter'?  I'm just sayin'........as you know from yesterday's blog my birthday began with a dusting of snow on everything, and very, very cold temps.  It took until almost noon before the snow disappeared.  I had to go out about mid morning and take down the sail shade as it was sagging terrifically under the weight of the unmelted snow.  I was outside probably less than 10 minutes, but felt like a popsicle by the time I closed the door behind me again.

Around the time the snow finally disappeared from the roof of the VW I began thinking about what I should do for my birthday.  After a few minutes of discussion with TLE we settled on a movie followed by an early dinner......the movie we opted for was 'Deep Water Horizon' which is a Mark Wahlberg film about the infamous British Petroleum oil well blowout in the Gulf of Mexico in April of 2010.  IMDB gives the movie 7.6 out of 10 stars.  We left the coach around 1:45 pm to arrive at Heavenly Village Cinemas in time for the 2:15 showing, and we made it by 2:05.....perfect!  As we waited outside at the ticket window it began to lightly rain, and, of course, there was a lady in front of us who, even though she was being told the movie she wanted to see was sold out, was insisting there must be at least one more seat.  I'm thinking "Come on!  It's cold out here!"....finally she stepped aside and let the rest of us buy tickets to a move that wasn't sold out.  Frankly, for a Monday afternoon, I was surprised how full our theater was.  We both enjoyed the 1 hour 47 minute movie and would agree with IMDB's rating of 7.6.

From there we walked a 100 feet across the Village to 'Base Camp Pizza'.....we had noted several days ago that this pizzeria garnered 4.5 stars out of 5 on Yelp based on over 2,300 reviews!  Wow!  That's impressive, right?  Based on that we decided to head there for my early birthday dinner.  We both ordered draft Porter's which were quite good, and also a spinach/artichoke dip with pita chips, which were also quite amazing.  On the other hand, we ordered their signature Base Camp pizza, and were underwhelmed.  The service was prompt, courteous, and efficient, but the pizza just didn't live up to the 4.5 stars.....we would be somewhere around 3.5 stars...... 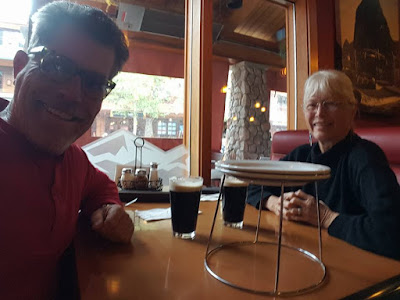 ......all that being said, our high opinion of Lake Tahoe Pizza being the best pizza place in the Tahoe Basin is intact.

Thanks for stopping by!
Posted by Whatsnewell at 8:31 AM