Saturday dawned clear, but still quite cold....a leftover from two days of rain.  My 'written in Jello' goal was to be ready to roll the wheels between 11 am and 12 pm......I had a lot still to do.......put the awning mat in the trailer, dump the black tank, clean the windshield & mirrors, remove the mirror and wiper covers, check the air pressure in my tires (especially the trailer), turn off the water heater, secure the Norcold reefer, lock all the storage bins, put the water and sewer hoses away, AND make sure everything inside the Newell was secure (TLE usually does that), which took me longer than I thought it would.  All that being said, I was ready to roll by 10: 45 am.......I took some time to get dressed in presentable clothes, go to the bathroom and then unplugged my electrical umbilical cord, stowed it and then cranked the big Detroit Diesel 6V92....she started first try!

As I snaked my way out of TVC I had this wistful feeling come over me.....I felt like I was leaving a good friend.  As I passed the office Stacey (housekeeping) stepped out to wave and wish me happy travels, then as I passed the Thousand Trails office I saw Adam (maintenance manager) stopping in his golf cart to say goodbye.  I will miss these co-workers who have morphed into good friends over the summer, but I will not miss what is to come.....WINTER.  It's already been colder than I prefer, and I was looking forward to more human friendly climes.

As I passed under the Tahoe Valley Campground entrance sign I looked at my watch to find it was exactly 11 am.....thank you Mr. Jello!  Whenever I have been sitting for soooo long I, of course, begin to think about things that can go wrong, mainly because things have gone wrong before after long stretches of inactivity, but this day all systems were go......the coach aired up fine, my speedo worked fine, my cruise control worked fine, the tail lights on the coach and trailer worked fine......everything felt fine, and it was good to be staring out that big windshield seeing new scenery for the first time in 6 months.

Before I knew it I was at Stateline stopped at the stop light looking at two of the four casinos.....Harvey's and Harrah's.....that are scrunched up against the border, and then I was off cruising by Zephyr Cove, Cave Rock, and finally Spooner Summit where I stopped briefly to step outside to check to be sure everything was as good as it felt.  Then it was time for the 9 mile plunge down 6% grades to Carson City.......... 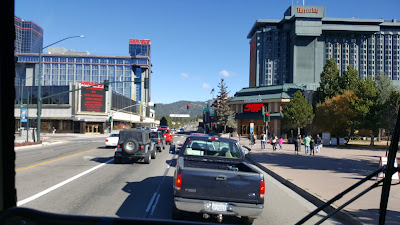 ......I 'jaked' down HWY 50 in 2nd gear thankful, once again, that I did not have the VW in the trailer.......it sure makes climbing and descending less complex!  As I turned on to US 395 southbound it was just after noon time, and I was just 3 miles from Silver City RV Resort.

One thing I forgot to mention is when I turned off the water heater it seemed like it was already off......I don't remember 'hearing' the pilot light.  Well, I knew we had been cutting it close with our propane usage, because when we moved from site 426 to 167 I noted the tank was just under 1/8th full.  As it turns out I had run out of propane this very morning!  These thoughts were going through my mind as I pulled into Silver City so I just hung a left and parked in front of the propane station.  When I turned off the engine I walked back to the refrigerator and noted that the 'CHECK' light was on.....this means the fridge was getting no gas!  My suspicions were further confirmed when the attendant finished filling my 60 gallon propane tank.....it took 58.6 gallons of propane!  That is the most I have ever put in at one time!  That was one narrow margin........if I had stayed at TVC one more day, which I had originally planned to do I would have had to unhook from the trailer and drive over to the propane station...... 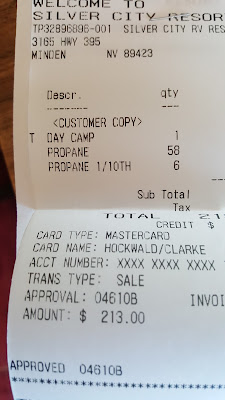 We were assigned to site 36 which barely fits our 62' in length.....we have stayed in this site several times, so I already knew we would fit....... 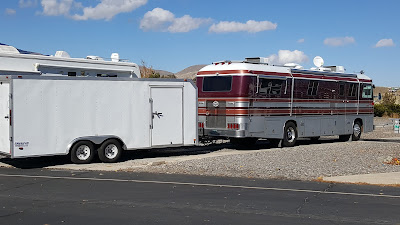 ......after setting up and buying some snacks in the RV park store I spent the rest of the afternoon watching one college football game after another, then part of the Inuit vs. Cubes MLB game......the Cubes were just not up to it once again as the Inuit pitching stifled the Cubes hitting.....the Inuits won handily 7-2, and now lead the best of seven series three games to one......not a good situation for the Cubes.

TLE is now winging her way home, and 'Bachelor Man' will soon go into hiding once again.......I think I much prefer 'Married Man' more......hurry home TLE!

Thanks for stopping by!
Posted by Whatsnewell at 7:49 AM