Thursday started out a little slow......I knew I needed to get my work clothes on so I could get together with Alex (he's only here until Friday) and the Case front loader to remove the decaying concrete picnic table, remove the never used grill, and make the site a little more level for next season.  Finally about 10 am I began to get dressed, and by 10:30 I was at the office punching the clock, and picking up a two way radio  to call Alex to see when he was available to come to site 426 for the aforementioned modifications.

As it turned out Alex was finishing up work in a new fence, so I drove over to help him finish, so he could help me.  By 11:30 Alex was at my site with the Case front loader to remove the picnic table and grill........ 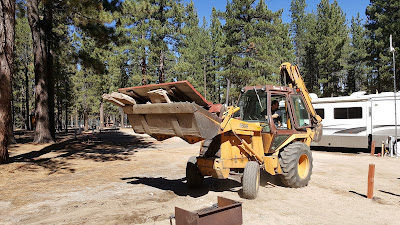 The picnic table is history.....the grill (foreground) is next! 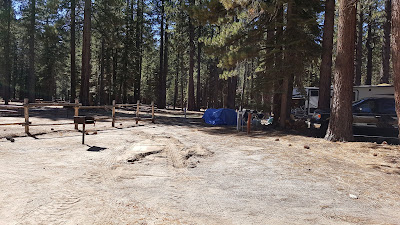 The picnic table and grill gone, and the site is being leveled 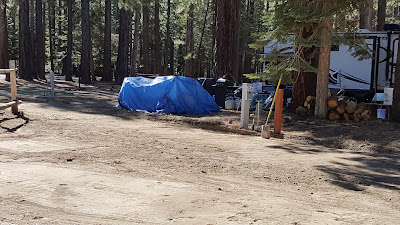 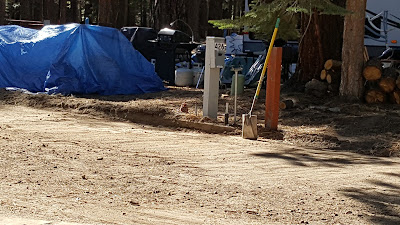 .....after Alex finished leveling the site as best he could I got to work with a square point shovel to do the finish work.  It took me about an hour to get the site to where I wanted.  It's not perfect, but it is significantly 'more level'.  We had two problems......the site slopes severely from back to front, and is off camber from side to side, so we have great difficulty in keeping the coach level over the time we are here.  With a more level site it will be easier to keep the coach level, especially side to side.  The added bonus is we now have the ability to position our trailer and coach in the site in a way that allows us to use the space more efficiently.  Before the removal of the table and grill we were pretty much locked into one configuration, which, after three years, was just not working for us anymore.

You might wonder why we are ripping out grills and picnic tables......what if other future customers would like the table and grill where they were?  The reality is site 426 is an employee site, and will only be occupied by us, or another employee in future summers.  We, or other employees will be the only ones who use this site all year long.....it is not rented out to the public.  In addition the concrete footings on the picnic table were crumbling after 35 years of Tahoe winters and summers, and is becoming unsafe......it is time to replace it with a portable picnic table as we have done in a majority of other sites.

TLE and I clocked out by 3:30 and spent the rest of the afternoon, evening watching MLB playoff games with a little Thursday night NLF thrown in for good measure.

Thanks for stopping by!
Posted by Whatsnewell at 9:24 AM