Saturday began with a feel to the air I have not noticed for weeks......even though it was in the 40's the air had this 'balmy' feel to it portending, at the very least, a short sleeve day, and that is how it played out....by 9:30 am I was in short sleeves, and it just got warmer......well, 'warmer' is another of those relative terms, but you know what I mean.  After spending most of the past two weeks in a winter jacket, UnderArmor, gloves, long pants and thermal socks it was nice to actually work up a little sweat.

I spent the first two hours of my shift picking up trash along Melba Drive between 'C' Street and 'B' Street, then fixing an interior split rail fence, as well as the exterior wood fence that goes from the entrance north about 100 yards.  I then made a run south to the point where our fence intersects the airport fencing to see if there were any new holes in the fence, and there were none.  So, there are two possibilities to explain the lack of fence breeches in the last 3 weeks.....1) The militant fence cutting neighbors have given up and are accepting the new reality, or 2) They are just waiting for me to leave for the winter......of course, I hope it's the first, but being a realist it may just be the second.....only 6 months of winter, and my absence will reveal the verdict.

Finally, I got back to Section 'E' to finish painting the tent site directional arrows, and site posts.  In all I painted a dozen site posts, and was able to cross them off my list.....there are still another dozen in Section 'A' that need to be painted.  Then it was time to refresh and/or create new directional arrows.....I got within 7 of finishing the remaining 16 directional arrows when I ran out of paint.....of course there are three more gallons of red street paint, and I could have gotten another gallon to finish them, but I had another task which required TLE's help......Friday is the last day we both work together.....after Friday I'm not back on until Tuesday, and Tuesday is the day she is flying south to Dallas, TX for a family reunion....she will be gone until the 30th, and we are leaving for SoCal the next day.

As part of our survey of all the RV sites we needed to finish identifying all the sites, which, in an emergency, could become pull through sites if the sites behind them are vacant.  Some sites, as I have oft written, are difficult to back into......if for some reason one of our customers is having difficulty getting into a given site and the site behind theirs is vacant they can enter from the rear making it a temporary pull through site.

In addition to that there are numerous (the number was previously unknown) pedestals in Section 'G' which have been 'abandoned' for various reasons over the years.  The lids have all been screwed shut, and site numbers have been removed.  How long these pedestals have gone unused is anyone's guess, but it must date back to the ownership of the Martin family.  At any rate we (TLE and I) located 6 of them.  I removed the screws to each and found that five of them still had functioning 30 and 50 amp outlets inside.....a sixth has the needed wiring, but needs to have the 30 and 50 amp outlets reinstalled.  Additionally, 2 of them have sewer connections, while the other 4 would be water/electric sites only.  Why does this matter?  Well, on extremely busy weekends (July 4th weekend until Labor Day) we sometimes need a few extra sites for a day, or two.  We hate to turn people away, so having a few 'off the grid' sites, like these, held in reserve will come in handy.  They are mostly smallish sites which would accommodate 25-30 foot RV's.

Once that was done it was closing in on 4:30 and it was time for me to punch the clock and call it a day.....TLE stayed on until about 5:15 helping Ben close the office, and then met me on foot at the Trolley House to walk over to Lake Tahoe Pizza for a dinner hosted by Dan Barnette, our onsite Thousand Trails salesman, as a 'Thank You' for our help in making his summer successful.  Dan ended up #1 on the country for 'Zone Pass' sales...... 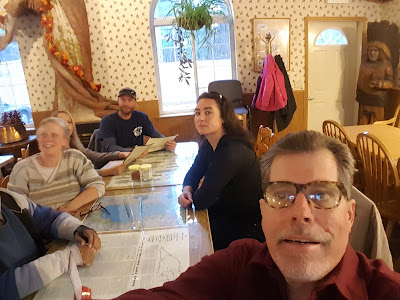 My timing for our 'USIE' was a little off....we had 10 people present...in the picture, left to right: Stacey, Veronica, Adam, Sally and moi.  Not pictured are Robert, Dan, Mike & TLE as well as Robert's two daughters.

.....we had a lovely time, and consumed several pitchers of Ballas Point Amber.  We had a nice turnout considering mostly everyone is gone for the season now.  Regrettably, my Trolley Dodgers lost their game versus the Cubes 5-0 and the Cubes are going on to the World Series to play the Cleverland Inuits.

Thanks for stopping by!
Posted by Whatsnewell at 9:00 AM