7:09 am - Monday - 42 F degrees, 56% humidity, wind 3 mph out of south.....partly cloudy according to the weather report, but I can see the mountains in the distance that surround the Tahoe Basin, and they are covered with snow from yesterday's storm.  The wind finally abated about 4:30 am after blowing ferociously all night. 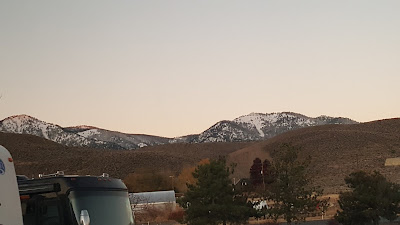 It's a beautiful after the storm morning! 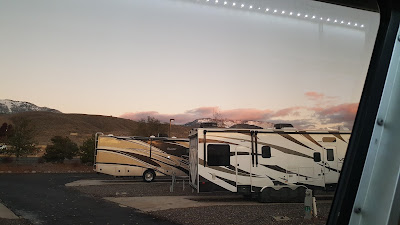 Sunday I was up just before 6:30 am.....why?  Well the first NFL game of the day between the Bengals and Redskins from London began at that time.  And so my day began with a bang.  The London game went on until after 10 am as it went into overtime, and they played the entire overtime without scoring a single solitary point.....the second such tie in 7 days.

When I checked my phone 6:30 there was a text message from TLE advising she had made her flight out of DFW and should be arriving in Reno between 10 and 10:30 am......YAY!  All morning long the weather was spectacular........big puffy white clouds scudding along the skyline, and lots of sun.

Around 11:20 TLE had not yet arrived, I thought, so I sent her a text asking her ETA......she replied immediately "Look outside!"......she had just pulled along side the Newell.  There were long hugs as you would expect, then she brought in her luggage (she really travels light) and we were off to do some small shopping before we head southward Monday.  Of course, we couldn't leave out a stop at In-N-Out for a burger (no lettuce wrap this time) before returning home for the afternoon. 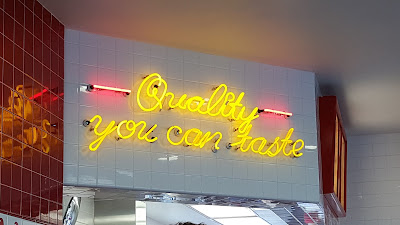 By the time we returned the weather was beginning to look quite ominous...... 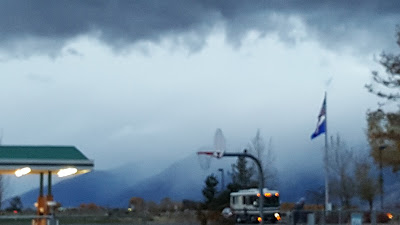 .....so we quickly unloaded our groceries and headed inside ......eventually the rain seen in the distance arrived at Silver City RV Resort and it rained on and off the rest of the afternoon, and into the evening.....the rain was accompanied by the aforementioned winds.

My Broncos won their sixth game against two losses in the afternoon set, and the nightcap between the Eagles and Cowboys was, for a change, a very good game going into overtime.  The Cubes finally got off the deck and won a home game verses the Inuits 3-2, so the series goes back to Cleverland for game six on Tuesday......can the Cubes win two more games and the World Series?  The answer to that question will known in short order.

We'll be rolling our wheels south in a couple of hours so it's time to wrap up today's blog post with one more interesting tidbit......for a couple of years now my blog has been averaging 4-500 unique views per day.....not many by some standards.  Nonetheless the past week the views have more than doubled, and yesterday set the all time record...... 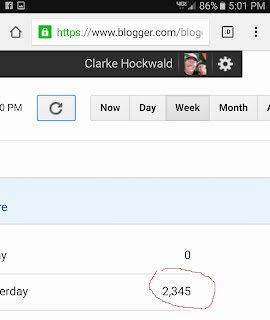 Posted by Whatsnewell at 7:51 AM