It has been quite a while since TLE and I took a bike ride together......we just kind of ran out of gas the last month, or so.  I rode a few times individually, but she did not ride at all, so I was mildly surprised when she indicated she wanted to go for a bike ride using the Cannondale tandem.  One of our favorite bike paths here in SoCal is the Pacific Electric Trail which runs from Claremont Village in Claremont to Cactus Ave. in Rialto (where we are).....in fact the trail runs right behind the Fontan/Rialto Elks Club where we are staying....talk about handy! 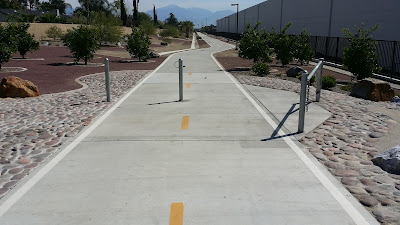 I had still not yet unpacked the tandem, so it fell to me to get that done so we could take a ride.  We were off on our ride by 10:30 am heading westward on the trail.  There was a coolness in the air as we pedaled along at a steady 14 mph.  As we passed under the I-15 bridges our cyclocomputers read just over 7 miles ridden, and that is where we made our turn around to head back.  We ended up riding to the end of the trail at Cactus and then back to the Elks Club giving us a about 16.4 miles total for our first bike ride in a very long time.

After getting back and taking a few minutes to cool down I spent some time in the trailer using my new back/ab machine, and other exercises I have neglected for too long.  Fortunately I arrived back in SoCal weighing one pound less than when we left for SLT back on April 27th, and I am still under 200 lbs.

Monday means MNF (Monday Night Football), and that is what we watched......the game between the Bills and the Seahawks went right down to the wire with the Seahawks winning 31-25 as time ran out.  Unfortunately, the game was marred by poor officiating, and that has been the story this morning on ESPN.  As a former professional soccer referee one of my goals for each game I officiated was NOT to be the story the next day, and I feel terrible for that referee team, but they really blew some critical calls last night which ended up benefiting the Seahawks in the end...... 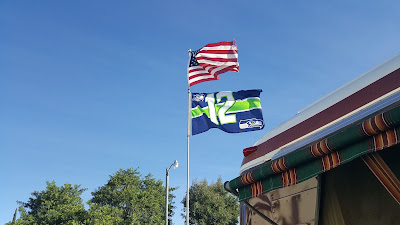 .....of course, I was flying my special 'Seahawks 12th' Man flag, which must have been teh difference.

Posted by Whatsnewell at 8:17 AM