It is taking me longer than I thought to readjust to the MUCH warmer SoCal climate which takes place at 800-900' elevation compared to that of SLT which is at 6,300' elevation and higher.  The days here in early November are still in the low to mid 80's with overnight lows in the mid to high 50's, whereas the daytime temps in SLT are running in the high 50's to low 60's with overnight temps as low at 27.  We have run the AC every day we have been here except for the day we arrived, Wednesday......sometimes in the late afternoon both AC's have been running.

When we were at the Fontana/Rialto Elks Club last April I didn't realize we were only 1.5 blocks from the local Home Depot......probably saved me a lot of dinero last year, but this year I've already been there three times in four days.....while I was there yesterday I picked up another concrete pier so we could put up our sunshade.......we are oriented north to south, so our passenger side gets the afternoon sun, which is quite intense......the sunshade has already made a difference!  By the way, the concrete pier I bought at Home Depot is identical to the two I bought at Lowe's, but over $2 less per copy.....I'm just a sayin'. 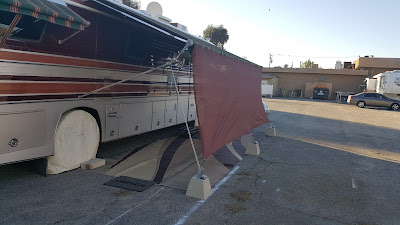 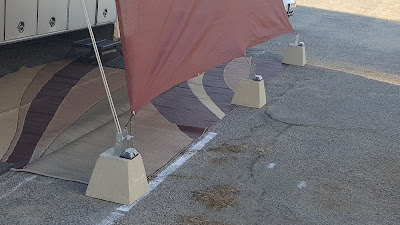 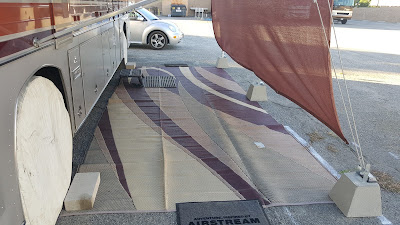 Other than the acquisition of the third concrete pier, putting out the awning mat, and installing the sunshade I didn't do that much Friday.....it was just a day to relax.  Oh, when I went to Home Depot I also stopped at the USPS to mail our absentee ballots for this current election.

When I got home I decided to assemble the new back/ab machine I bought on eBay.....before we went on the road I had one, but it was not easily collapsed for travel, so I gave it to my oldest son along with my Stairmaster.  As long as I did my daily exercises on that machine I never had any lower back pain, but this summer it began to return, so I decided I needed a more portable one...... 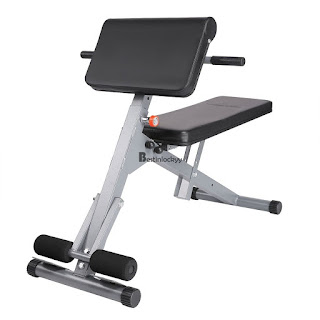 Assembled, and ready for use 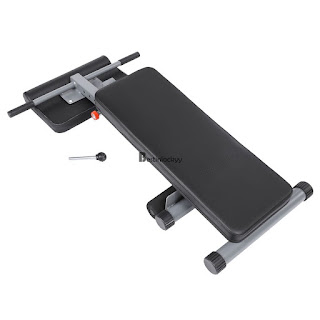 Flat, and ready for travel

I did, also, decide to vacuum out the trailer for the first time in over a month.....there was a lot of TVC sandy soil in there!  Hmmmmm......I guess I did more than I initially thought Friday.  We spent the evening catching up on some recorded shows (Hell's Kitchen, Gold Rush and Timeless), and were in bed a little after 10:30 pm.

Thanks for stopping by!
Posted by Whatsnewell at 9:33 AM