We are now 5 days past Election 2016 and we still see a small segment of the population fighting the results of the election, spewing hate, destroying property, injuring those whose political views differ from theirs all because of an unexpected political outcome.  That is all I have to say about that.....time to get on with real life.

Sunday was one of those days I love and cherish about being back in SoCal.....we had a family brunch at the home (our former home) of my daughter, Kate, and husband, Nick.  We arrived precisely at 10 am and found the rest of our kids, and grandkids already there. 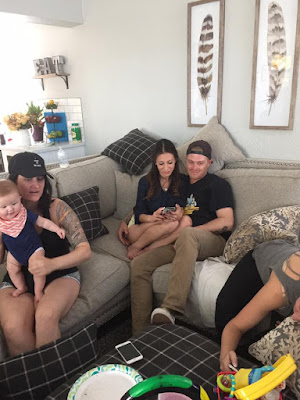 Less than 11 months until Tim and Laila tie the knot! 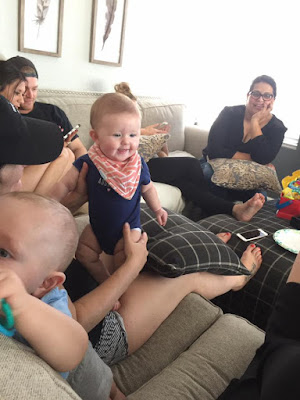 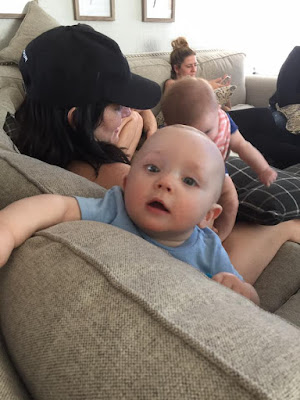 Brayden James showing how he can stand up on his own! 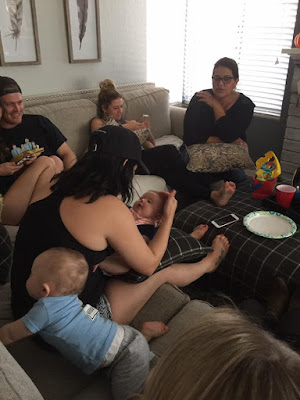 My daughters have all become very good cooks, as it were......I am very impressed.  We had a wonderful couple of hours carrying on 4, or 5 simultaneous conversations as Hockwald's always do.  I am love with the men my strong, independent daughters have chosen to spend their lives with.....I am in awe of the strong, independent women my sons have chosen.  Life is good, and my family is growing in ways I never envisioned.

We were back home in time to watch the thrilling end to the Broncos vs. Saints game played in New Orleans........the Saints had just tied the game (with seconds to go) on a touchdown and were getting ready to kick the extra point which would have won the game for the Saints.....then the completely unexpected happened.....a Broncos special teams guy hurdled the offense line as the ball was snapped, blocked the kick which was recovered by the Broncos and run the length of the field for a 2 point conversion giving the Broncos the win by 2 points......OMG!

The rest of NFL Sunday was just like that......the Cowboys came from behind against the Steelers to win in a game that saw at least 8 lead changes.......the Seahawks outlasted the Patriots in a Super Bowl like game in New England for the night cap.   The entire day was full of amazing comebacks, and upset victories.....almost felt like college football.

Just a few days now until I go 'under the knife' to have my cataract surgery (Wednesday, November 16th).  I've started my two days of antibiotic eye drops leading up to the surgery.....by the end of this week, God willing and the river don't rise......I shall have distance vision in my left eye once again.....YAY!  It does not seem possible we have been here 12 days already.....time is fleeting!

Thanks for stopping by!
Posted by Whatsnewell at 9:07 AM