8:08 am - Wednesday - Thanksgiving Eve - 53 F degrees, 68% humidity, wind - calm.....being greeted by crystal clear blue skies.....got down to 56 F degrees in the bedroom last night with my window being open once again.  I slept until 7:40 am, which is late for me.....TLE is still slumbering away as I compose this blog entry.

As I have written previously, we (TLE almost exclusively) have been replacing our red (TLE says the color is 'chili pepper') throw rugs slowly but surely with pretty much identical throw rugs from Kohl's......the most recent acquisition came through Kohl's online store as we could not find this particular size (60" x 48") in their 'bricks and mortar' stores.  TLE left mid morning Tuesday to drive over to the local FedEx center in Bloomington to pick up the rug plus run some errands, and I remained behind to begin to rearrange the front inside portion of the trailer to create a space for our new fold up back/ab machine to be stored while we are in transit.

The rearranging process took much longer than I expected, however, I love this kind of project and the time just seemed to evaporate.......I was just about done when TLE returned from her errands around 12:30 pm with the new throw rug.   When I began my reorganization of the front of the trailer I initially thought I would have to part with two items.....an extra folding chair (just like the one I use at my computer station) which we had never used in 3 years, and a 'creeper' I have been carrying for 5 years, and never used.  The extra chair was purchased originally as a backup for my computer station chair, and the original chair is beginning to show signs of daily use, so our plan was to swap them, putting the unused chair in place of the current one, and put the current one into storage at my son's office where we store a few other things.  I was just going to give the creeper away, probably to my youngest son, but as it turned out I found room for it next to the back/ab machine..... 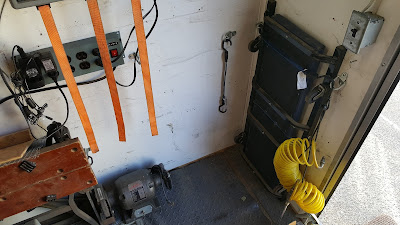 ......so now I am asking myself, even though there is room for  the creeper....."Why keep it?"..... and that is the question.   Essentially I moved the Black and Decker Workmate (left bottom of picture) to the left, and the electrical outlet module (just above the Workmate) to the left and down a few inches.  The creeper used to be stored to the left of the Workmate, and the extra chair (now going to storage) was where the back/ab machine is going.

By the time I was finished it was time for a snack, and a nap.  An update on my 'bionic' eye....things continue to progress steadily.  I can tell the swelling in the eyeball has lessened, and it doesn't get tired as much.  I don't have that overwhelming feeling of needing to just close my eyes for a while to rest them.  I'm enjoying not wearing glasses all the time....I only wear off the rack reading glasses now (2.00) and I love that.  I am getting tired of wearing the eye patch to bed every night.....who wouldn't, right?  I can now return to exercising, and as of Tuesday I can now wash my hair in the shower.....does it ever need washing!

Our time here in SoCal is rapidly coming to an end.....we have been here 20 days now and we will be rolling our wheels once again a week from this Saturday southward to Yuma for our dental appointments the following Monday.

Oh, one thing I forgot to write about Monday is that after returning from 'junking' I spent about an hour going through all my clothing and 'thinning out the herd' a little....I ended up with a 30 gallon trash bag of things I no longer wear, which we will donate to the local Goodwill.  Suddenly there is a lot of room in my closets and drawers!

Thanks for stopping by!
Posted by Whatsnewell at 10:20 AM