Sunday, was, need I say it......NFL Sunday Ticket so you know what I was doing most of the day.  I really can't do much else besides take a walk....I can't work on the Newell, I can't take a bike ride, I can't wash my hair, I can't sleep on my left side, I can't put on eye makeup.....oh, I guess that one doesn't apply to me.....I can't rub my left eye (this is off the table for a long time), and I can't exercise until Wednesday due to my recent eye surgery, so I am in waiting mode right now.

I was looking at the weather in South Lake Tahoe for the next two weeks, and things have turned decidedly colder.....the highs have slipped to low 40's, and high 30's with overnight lows getting into the teens with several days of snow in the offing including today.  Glad we are at lower elevation and warmer temps now.

The Denver Broncos had their 'bye week' this weekend, but the NY Giants and Seattle Seahawks were playing and they both won their games.  The Cowboys won their 9th straight game after losing their opening day game.....what a turn around for them.  The night game saw another once great team, the Green Bay Packers, lose their fourth consecutive game.  Right now everything is turned upside down in the NFL and it seems everyone except the Cleveland Browns and Jacksonville Jaguars can win on any given Sunday.....they are a combined 2 and 21.

We had made plans a few days ago to go to dinner with with good friends Paul and Kayre Hood, and Brenda Wendt at 'Rock and Brews' in Rancho Cucamonga.  'Rock and Brews' apparently has some involvement by Gene Simmons and Paul Stanley of the rock band KISS, and have stores all over the U.S., and a couple in Mexico.  I have been riding mountain bikes with Paul and Brenda since the 90's, but our friendship goes beyond mountain biking, and even though all of us are a little the worse for wear, and we don't ride as oft as we once did, we still make it a point to get together whenever we can. 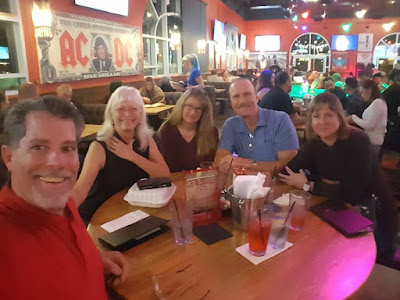 Dinner with good friends at Rock and Brews....left to right: TLE, Kayre, Paul and Brenda

They offer a lot of main stream, and craft brew options, and the food is great......Yelp gives them 4 stars (the Rancho Cucamonga store) on over 140 reviews.....we would have to agree, the food and brews are great....I had blackened fresh salmon with roasted vegetables, and enjoyed every single bite.  We arrived at 4 pm on a Sunday and the place was packed......I mean packed!  They have a lot of seating capacity and we were seated very quickly.  We did have to wait a while for our server to come to our table, but once she arrived things happened on a very timely basis.  In all we spent two hours talking about everything under the sun, as we always do......good times!

We were home by 6:30 pm and I settled in to watch the end of the Packer vs. Redskins game....it was close until the middle of the 4th quarter when the Redskins pulled away to win 42-24.

Thanks for stopping by!
Posted by Whatsnewell at 7:53 AM