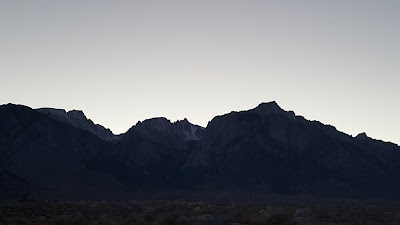 As the sun sets behind Mt. Whitney Tuesday evening

We were both up early in anticipation of our arrival back on SoCal to spend a month hugging and kissing our kids, grand kids and great grand kid!  The air was clear, but a little blustery.....a continuation of the windy conditions overnight.  As I sat typing yesterday's missive I looked up just as the sun rising over the White Mountains behind me lit up the Sierras in front of me.....I love this time of day in the west.  The colors continue changing all day long, and every 30 minutes you would swear you have been transported to a new place. 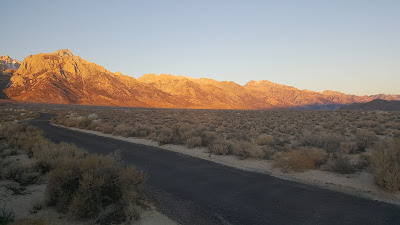 As the sun coming over the White Mountains lights up the Sierras once again....

As I entered the starting point and destination point in my Delorme GPS program I saw that I was routing us a different way than we had come into Tuttle Creek.  By nature I prefer to return the way I came because I know what to expect.  This new route was tempting as we could expect up to a 25 minute delay at the same construction zone as the day prior.  The unknown about this new route was the quality of the road, and the grade percentage back down to US 395.....what to do....well, we're not in a hurry, right?  We have all day to drive 193 miles.  So, at TLE's suggestion we got in the VW and drove the route.....it's only 5+ miles down to US 395......we drove the route down and back and decided it was doable in spite of a very narrow stretch .7 miles long......as we passed by the same point three times in that narrow .7 mile stretch we found the same bovine watching us pass....TLE caught this shot of the bovine on our third pass......she drove the VW and I drove the Newell..... 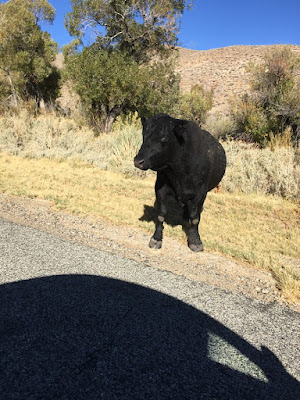 ......after returning to the Newell we decided not to load the VW until we got to the bottom to reduce our downhill weight by 3,000 lbs.......good choice when your Jake is not working.  When I hit the last 2.5 miles of the downhill stretch on Lubkin Canyon Road I put the Newell in 1st gear and just crawled down the declivity at 15 mph....sometimes a little slower.  We reached the bottom and the turnout where we planned to load the VW about 9:45 am, and were on our way once again southbound on US 395.

It was a wonderfully easy drive as I spent about 95% of my time in cruise control.....we had a slight tail wind so I had the driver's window open......it was whisper quiet as we floated down the road at 60 mph.

Soon we were stopped in front of the San Bernardino County sign on southern outskirts of Johannesburg, CA (an old mining town) taking a break........ 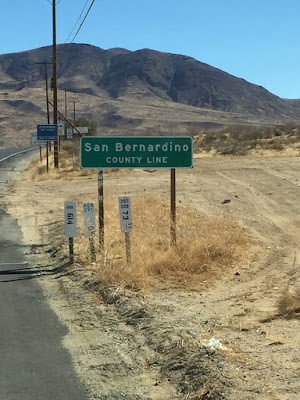 As we topped out at the Cajon Summit to begin the final 11 mile plunge into SoCal (about 6 miles at 6% grade)  I put the Newell in 2nd gear and slid down the Interstate one more time.....we arrived safely at the Fontana/Rialto Elks Club (our home club) a little after 2:30, dumped out black tank at the handy dump station, and backed into site 6 for a month...... 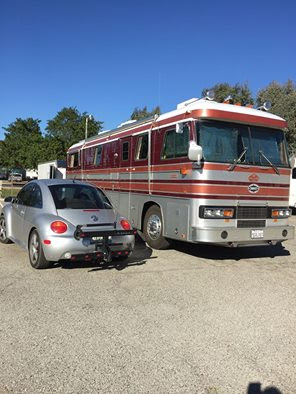 We have arrived at our SoCal home - Fonana/Rialto Elks Club!

......we did some basic set up and then sat down to relax.......Game 7 of the World Series was scheduled to begin at 5:08 pm, and we planned to watch every single moment.....this was an historic game, and most of America agreed.....apparently 70% of all TV's that were on last night were tuned into the Cubs vs. Indians game......yes I used their correct names for a change.  The game began with the Cubs going up 3-1 by the 3rd inning.....then it became 5-1, then 6-3 still in favor of the Cubs, but then the fateful 8th inning came.....the Cubs only needed 4 outs to get the 'W', but the Indians had other ideas as they tied the game 6-6 on a 2 run homerun.......the game was rain delayed at the top of the 10th inning, but play resumed within 30-40 minutes.  The Cubs scored two runs in the top of the 10th to go up 8-6, then it was the Indians' turn.....they score a run to make it 8-7, but then the Cubs got a ground ball from the next Indian batter to get the final out and the 108 year old drought was over.....the Cubs were world champions once again.

We were in bed by 10:30 looking forward to Thursday when we get together with all our kids for dinner at my son Tim's new home.

Thanks for stopping by!
Posted by Whatsnewell at 7:16 AM