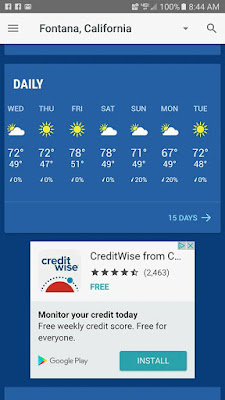 Since I will not be able to ride my bike, or exercise for at least a couple of days following my upcoming cataract surgery TLE and I resolved to get out and ride the tandem Monday, and hopefully Tuesday also.  We began our ride west on the PET around 10 am hoping to do an 'out and back' of 20 miles, but in the end I left it entirely up to TLE to decide when it was time to turn around.  Even though I have not ridden as much as I would like the last 60 days I have ridden and have gotten 'seat time' whereas TLE not so much until we arrived back in SoCal.  The forecast high for Monday was 89 F degrees.....another warm day......but as long as we kept moving the breeze created by averaging 12.5 mph on the tandem kept us comfortable, and other than two, or three times we had to stop at major streets for traffic when we felt the full intensity of the sun, remained comfortable for the entire ride.

As we approached Day Creek Blvd. and the 8.5 mile mark of the 'out' portion of our ride TLE let me know it was time to turn around.......okay, I was hoping to reach 10 miles 'out', but 8.5 is 1.5 miles further 'out' than we did the other day, so it's a net gain.  Our return ride saw us cruising at about 17 mph, and as high as 20 mph as the grade is slightly downhill with a slight tailwind.   We arrived back at the Elks Club just after 11:30 am quickly turning on both AC's to cool the interior of the Newell, and then spent about 30 minutes cooling down.

I spent part of the afternoon creating an email list for the future TVC employees we have recruited for the 2017 summer season, and then sent the first of many emails to communicate with the group as a whole.

All the while I was carefully following my 'PreOp' instructions by putting antibiotic drops in my left eye every four hours, and ultimately I received the phone call I was awaiting from Pacific Eye Institute advising me when I must arrive at the surgical center for my operation......7:15 am Wednesday......that is going to be an early morning!  I, also, must begin 'fasting' at midnight Tuesday, wear warm comfortable clothing, and wash my hair and face before arriving for the surgery.  Okay, let's face it.....I am nervous, but excited about getting vision in my right eye restored.  Right now anything beyond a foot or two is very fuzzy and seemingly getting worse by the day......I obviously reached a tipping point this summer where the cataract worsened exponentially. The actual procedure takes just 6 minutes, but there is PreOp, then PostOp time.....I am told I will be at the surgical center for 3 to 3.5 hours before being released to go home

The MNF (Monday Night Football) game pitted the Cincinnati Bengals vs. the New York Giants......the Giants are the only NFC team I root for, and once again on this night they won another close game 21-20 with great second half defense.  So this weekend I won the trifecta.....the Broncos, Seahawks and Giants won.....that has not happened for a very long time.  You might wonder why I am not behind the L.A. Rams.....well, they left Los Angeles 30+ some years ago for St. Louis so my loyalties, understandably have shifted.  Frankly that has worked well, because it seems that one of the three teams I do support are always in contention.

One more day until surgery day.....YAY!!  Thanks for stopping by!
Posted by Whatsnewell at 8:49 AM