After two successive 'weekends' spent exploring YNP we decided to do a little exploring outside YNP......we were in the VW a little after 11 am driving north......US-89 northbound is a beautiful two way road that winds its way along the banks of the Yellowstone River  for about 52 miles to Livingston, MT where we then merged on to I-90 eastbound another 21 miles to Bozeman.  The skies were quite cloudy, and as one might expect we were rained upon a few times going and coming from Bozeman.

Bozeman is the nearest large city, and is also home to Montana State University.  This town founded in August of 1864, was named for its founder, John M. Bozeman.  Our first stop was the local Goodwill where TLE and I both found a few articles of clothing without which we could not live.......we found it had been raining whilst we were in the store..... 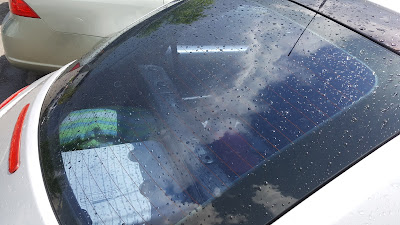 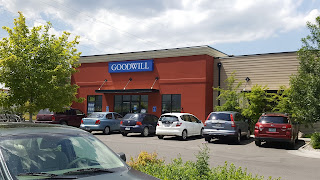 ....by this time is was close to 1 pm and time to scratch another itch we had......some brews and pub food.  There are numerous micro breweries in Bozeman, however, all but one, Bridger Brewing, were closed.  They have a 4.5 star rating on over 100 reviews, and those reviews were not lying.  Bridger Brewing has alfresco dining, but on this day with intermittent rain showers we opted for a rainless lunch and chose a table inside...... 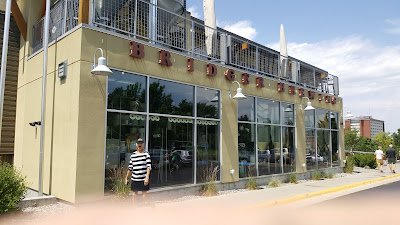 .....I ordered a 'Summer Shandy' and TLE ordered their 'McTavish Scotch Ale' 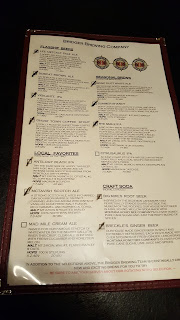 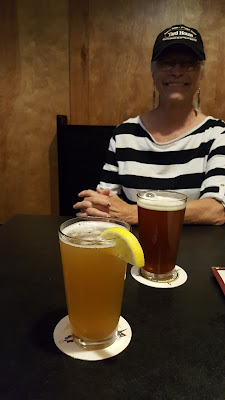 .......Bridger Brewing's food specialty is pizza and we both chose to order a slice with a house salad ($8).  All of their food prices were very fair.  We would definitely visit them again. 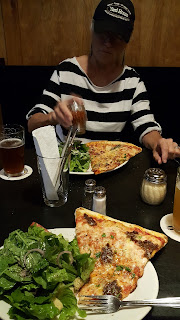 Next up was a visit to the local COSTCO to do some shopping, then to Target for TLE and for me a haircut.  Ya'll know I like to get my haircut at Supercuts, but alas, there are no Supercuts in Bozeman, so chose 'Great Clips' just across the parking lot from Target. 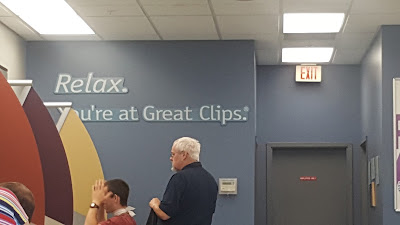 ......initially I was told it would be an hour wait, but ultimately I was seated having my hair cut within 30 minutes.  That worked well for TLE as she had not been in a Target for quite a while, and enjoyed browsing up and down their aisles.  I received a great haircut from Kelly, and was on my way back across the parking lot in a driving rain to pick up TLE from Target.  It continued raining most of the way back home, but finally stopped about 25 miles south of Livingston.

Eventually the rain stopped, and we were treated to a beautiful view as we drove south on US-89 back to Gardiner, MT...... 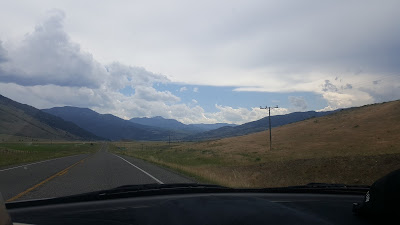 .....we were home by 5 pm with big smiles on our faces.  A very nice, uneventful day spent with each other doing things we enjoy doing together.

It was still quite warm when we arrived back at YRVP* so we opted to turn on the A/C for about an hour to cool off the interior of the Newell......still so thankful our 35 year old roof top A/C's work soooo well!!!

When you need to buy something from Amazon, think of us.......we will appreciate every purchase you make using our Amazon Affiliate link, and  remember, using our link will not add one penny to your purchase, plus we will receive a small commission.
Posted by Whatsnewell at 7:13 AM