I have been getting numerous messages from friends and readers about the earthquake swarm here in YNP the last few weeks.  Officially there have been 878 earthquakes related to the super volcano that underlies all of Yellowstone National Park.  Typically there are from 1,000 t0 3,000 earthquakes recorded in YNP each year.  According to the USGS (United States Geological Survey) the majority of these are in the 1.0 magnitude range, but there was one 4.4 recorded, which is the largest recorded earthquake in YNP since March of 2014.  We are told there is just a 1 in 730,000 chance the super volcano will erupt in the next 12 months.  Neither TLE, nor I have felt any of the earthquakes.  Most of them have been centered up around West Yellowstone, which is about 60 miles southwest of our current location.  All that being said, if the super volcano were to erupt most of the northwest U.S. would disappear, and a large portion of the U.S. would be blanketed by volcanic ash.

Sunday morning was coolish, and I decided to take a 10 mile out and back (5 miles out and 5 miles back) bike ride north on US-89.  This area is a little disorienting to me because when I think of  riding 'north' I usually associate that with a gain in elevation, not a loss of elevation, but the Yellowstone here flows north, so as I ride north I am steadily losing elevation just as the river is.  The terrain all appears to be high desert with a lot of scrub brush, but it is beautiful nonetheless.  As I hit the 5 mile mark I came abreast of the La Duke Picnic area....... 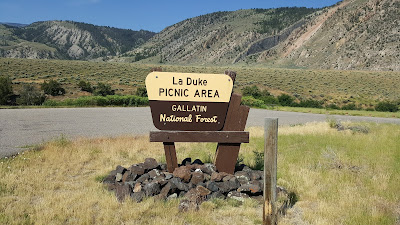 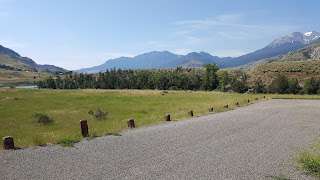 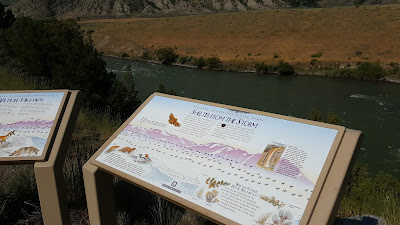 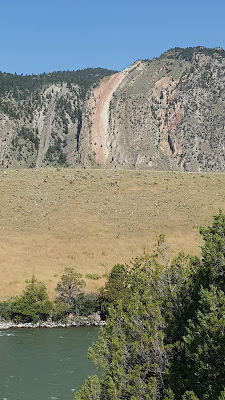 ......in all it took me about 42 minutes to cover the 10+ miles at an average speed of 14 mph.  I burned just under 700 caloric units.   It's been a while since I rode my Cannondale Bad Boy on the pavement as most of my 'riding' the last couple of months has been on the bike trainer.....not the norm for me.

By the time we left for work at 1 pm the daytime temp was up into the 80's, and it was obvious it would be a hot day in the General Store.  I arrived at my station in the 'Fountain' at 1:30 to find things in full swing.  We were plowing through hot dogs, pretzels and ice cream at a remarkable pace, and that is the way it typically is for the first two hours of the 'CLOSE' shift each day.  Usually by 3:30 things begin to slow down to a moderate pace for the rest of the shift, and that is how Sunday went.

It was extremely humid Sunday afternoon, and without the benefit of A/C we felt it inside the store.  Apparently the local elk population was feeling it also as we saw 20-30 elk laying the shaded grass areas as we approached the General Store (I wish we had taken a picture).  By 9:30 pm I felt like the equivalent of a 'wet noodle', but there was a smile on my face, because I knew I had two days off the clock coming.

We will do some more exploring Monday and Tuesday......thanks for stopping by!

1 - "A single tent site for $50?!!! Pretty steep. Loud. Sites smashed in together. Not the experience we were looking for but, being the largest campground in the area we were able to find a site last minute."

2 - "So disappointed in Tahoe Valley Campground this year. We always stay a month or longer and always the same site, have for the past 7 to 8 years. They have always made sure not rent it out to someone else and keeping us first in mind for next year. We reserve it before we leave. We went to reserve it and they already had it taken by someone else.
Talked to the new manager ( there has been 4 in the last two years ) he wasn't interested. Told us he couldn't take it away from someone else and give it to us. But they just did to friends who reserved a site last year and they gave it to someone else. Our friends ended up with a 30 amp site when they need a 50 amp. They said they won't be returning. This Campground needs a manager with people skills and Personnel skills. Someone able to supervise and oversee the workers. The facilities are not kept up as in the past. The family atmosphere that use to be here is gone. So sorry we won't be returning next year."

3 - "Campgrounds needs people out supervising sites. Too many people, cars and tents on some sites. If there was a fire, it would be a disaster to get out. There needs to be a limit per site. Ladies in the front office were wonderful and very helpful!"

When you need to buy something from Amazon, think of us.......we will appreciate every purchase you make using our Amazon Affiliate link, and  remember, using our link will not add one penny to your purchase, plus we will receive a small commission.
Posted by Whatsnewell at 6:59 AM