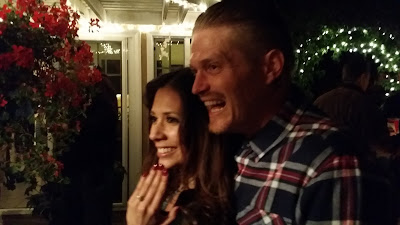 Friday I spent most of my work day being the cashier for the 'Fountain'.  My previous two stints totaled 5.5 hours in all.....on Friday I spent over 6 hours at the register, and finally feel like I am getting comfortable....even under the pressure of a line 6 folks deep.  It never really got super busy Friday, which surprised me considering it is the beginning of the 4th of July weekend.  I really don't know what to expect crowd wise as I compare all 4th of July experiences to our past 3 years at TVC where this weekend was just completely nuts.   What folks here may consider crazy may just be crowded to me...we'll see.  Meanwhile I cannot help but wonder how our friends at TVC are doing, because I know for sure it is already crazy there.

Many of you, I am sure, wonder what exactly happened at TVC that would cause TLE and I, who loved living and working at TVC , to quit just a few weeks into our fourth summer there?  What could possibly have happened to dislodge us from our favorite place on earth?  I have been necessarily vague about what happened up until now.  I will now attempt to recap from our perspective (there are two sides to every story) what transpired.  If you have been reading my blog for at least the past 8 months you will know we spent part of our winter hiatus from TVC recruiting a workforce of people like us.  We were pretty successful and in the end contributed some 22-24 workers of the over 30 we had at one point.  For this off the clock effort we were promised by the manager and assistant manager 40 hours of additional compensation each to be received prior to our arrival at TVC April 23rd.  This never happened.  This was the first in a long series of broken verbal promises by the manager, and assistant manager.  We had a lot of confidence in the manager as we had spent the summer of 2016 living in the site immediately adjacent to their site (when they were just a regular worker like us) getting to know them.  We were excited when we found out they had been appointed the manger for the 2017 summer season.....that excitement was premature.

Upon our arrival April 23rd we were assured that those missing 40 hours each would be added to our subsequent paychecks, but that still never happened.  Then we were promised full time positions for the next 12 months, TLE as office manager, and I as maintenance manger at an increased hourly wage, but that promise never materialized.  Instead we received a series of weak excuses as to why that could not happen, but were promised full time positions at another Equity Lifestyles, Inc. park beginning in the Fall.....that was also retracted.  Eventually we were both made supervisors (no increase in pay).....me of the Rangers, and TLE of the front desk.  We were given authority to assign schedules, manage and train those under us, however, our authority was continually undercut by the assistant manager. When we would complain to the manager about the complete lack of support from the assistant manager we were promised it would change, but it never did....it only became worse, and more blatant.  We had considered the assistant manager a good friend......we had even had gone to bat for them to be the next manager of TVC when the district manager was interviewing new managerial candidates for TVC.......the manager we had been excited about was being transferred to another Equity Lifestyles, Inc. property.  We were told by the district manager that the current manager was only the interim manager, that he had never been made the permanent manager.  We knew that to be a falsehood as the manager had received a letter from the same district manager literally appointing him as the permanent manager of TVC just a few weeks prior.  This should have been a red flag to us, but we let it slide.

The repeated undermining of our supervisory positions resulted in one employee, whom we had recruited, and whom I wrote about here, setting out to destroy our reputations by spreading malicious gossip about us, particularly about TLE.....this person wanted TLE's job.  In addition, this person became involved in an affair with the manager who was being transferred.  The manger never disclosed that affair to corporate, which is a direct violation of corporate policy.  This person began to exploit their relationship with the manager by publicly yelling at other employees, and essentially dressing them down in front of fellow workers.  We again appealed to the manager, and even the district manager who both promised change, but it only got worse.  On at least two separate occasions we are aware of this person publicly 'quit' amid profanity laced tirades directed at fellow workers.  On each occasion this person was allowed by the manager to retract their resignations for obvious reasons.

We became convinced that finishing out the summer in any capacity at TVC was untenable.....we were unhappy, losing sleep, our reputations, character and integrity were in tatters due to this person's vendetta against us, particularly TLE.  We never showed this person anything but kindness, generosity, and compassion, but were stabbed in the back repeatedly.  This person became a poisonous influence throughout the park, and it was obvious to us they would not be fired, so we decided to remove ourselves from the middle of it all and found new jobs as I have previously written.  We tendered our written resignations on May 31st, and began working for Delaware North on June 16th.

Now, to be fair, this person (the back stabber) is finally gone from TVC as the last week, or so, but the manager is still there managing TVC while they also manage the other Equity Lifestyles, Inc. property.  Other employees have also left as a result of the practices of the manager and assistant manager.   We are told a new manager has been hired to replace the manager who is being transferred, but the assistant manager continues in their current position.

In the end every single verbal promise made to us was broken both by the manager, assistant manager, and the district manager.  We do not see ourselves ever working for this corporation again at any location anywhere.  Now that we have been exposed to a different corporate culture we realize why there has been, and continues to be such a big turnover in personnel at Equity Lifestyles, Inc.

I've tried to relate the sequence of events in as an unbiased manner as possible, but there is no doubt some of my personal opinions and feelings have leaked into my writing.  As I began this piece, I indicated it would be from our perspective, and the preceding is our perspective.  There are two sides to every story, and I have no doubt those about whom I have written will claim a different version of events.  We were never given any promise in writing.....all promises were verbal, and can therefore be denied by management, but those who know us personally, and know our character and values know we are not prevaricating.

Well, that's the straight 'skinny' as they say......we are in a new place, we are happy, and moving forward.   We wish only the best for the many friends we left behind at TVC.....not so much for management.

When you need to buy something from Amazon, think of us.......we will appreciate every purchase you make using our Amazon Affiliate link, and  remember, using our link will not add one penny to your purchase, plus we will receive a small commission.
Posted by Whatsnewell at 9:07 AM