If it is possible I think Thursday's skies were even clearer than Wednesday and with that in mind we decided to repeat our hike to the top of Mt. Rubidoux.  We left home for our 1.5 mile drive over to the trailhead about 1000 hours, and were on our way hiking by 1015.  It was immediately obvious that the temperature was already higher than Wednesday....fortunately there was a bit of a breeze which provided a some relief....... 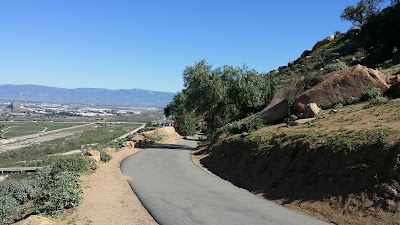 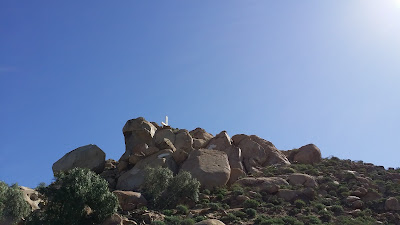 The Mt. Rubidoux cross just peaking over the rocks

.....even on a clear day there is always a little bit of haze in SoCal.  To the west of Mt. Rubidoux there is a solar farm that has been under construction for about a year.....each time I climb to the top via bike, or hike I have been noting the progress, and it looks as if it is in operation, or almost there. 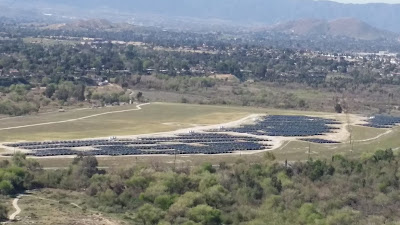 After our hike I dropped TLE off at home, and then drove over to our house to pick up a couple of things, then up to my son's office to pick up whatever mail had accumulated before heading back home.

We spent the afternoon reading and enjoying the cooling afternoon temperatures......while it gets a little warm between 1400 and 1600 hours, it cools off quickly after that, and we are able to leave a few windows open at night, which I prefer.

We did get a call from the new manager at Tahoe Valley Campground about this summer wanting to know if we can start working earlier than May 1st, but that really depends on when our dental work is completed, so we'll see how that work out.

Thanks for stopping by!
Posted by Whatsnewell at 8:34 AM