I had a conversation with the Jello about our plan to take two days to drive the 313 miles from Columbus, MT to Sidney, MT, and after a short discussion decided it would be better to do the distance in one day.   "Why?" you ask.....well from what I was hearing through the grape vine workers were already arriving and if we took an extra day we might not get a 50 amp spot.  Normally we don't really mind having 30 amp, but when it is very hot, or very cold it is a little more complicated living off 30 amps....each of our A/C's and electric heaters uses around 10 amps each....give, or take an odd amp here and there.  When it is cold, like it will get here in a week, or so we are usually running both electric heaters, plus the basement heater....that's 30 amps right there which puts us on the edge of blowing the breaker.....plus, if we turn on the electric coffee maker, which we prefer, that puts us over the limit.  So, all things being equal, and the fact we will be here the better part of a month, we would prefer to have 50 amps, which is really 100 amps (50 amps per leg), and not have to think about it.

We were both up pretty early Saturday so we could get on the road by 8 am giving us plenty of time to drive the 313 miles to Sidney and still take our customary rest stops.  Our first stop of the day was Billings, only about 38 miles into our drive, so we could fill up our propane tank at the Flying J.   We arrived there around 8:45, and by 9 am were on our way again.

It wasn't long until flying insects began committing suicide by flying directly into our windshield.  As we drove TLE took a number of pictures of the surrounding area.....pretty flat with very long views....but kind of marred by the insect slaughter visible in this picture. 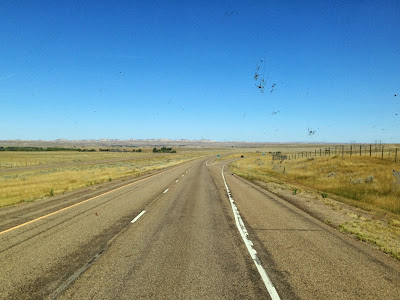 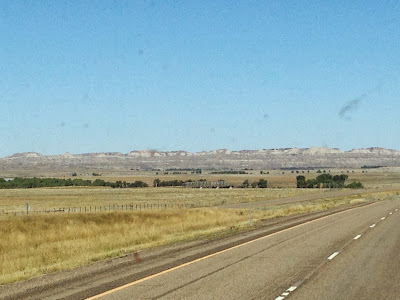 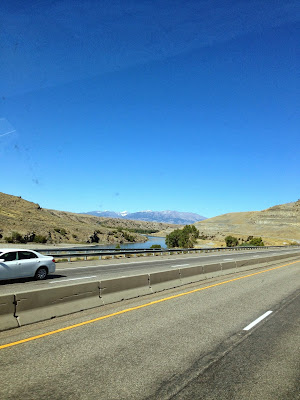 The Yellowstone River once again 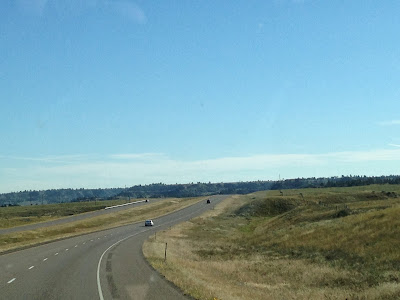 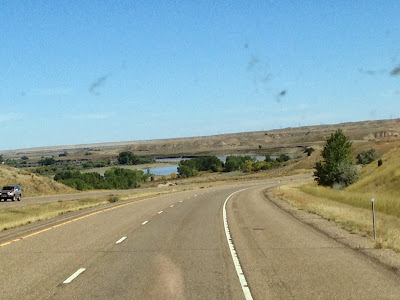 As we were driving down the Interstate I saw a large pickup truck entering the Interstate on my right so I moved over to the #1 lane to let him merge into the #2 lane.....just as I did that he kicked up a rock that hit our windshield (see below) and put a large dime size chip near the middle of the drivers side.  In over 40,000 miles of driving since we purchased the Newell this is the first glass damage.  Fortunately, before we left on our adventure I endorsed my auto policy to "100% glass coverage" meaning there is no deductible for repairing, or replacing any of the glass in our coach, or car.  Our windshield is a split one, and fortunately the damage is to the older piece of glass on the drivers side. 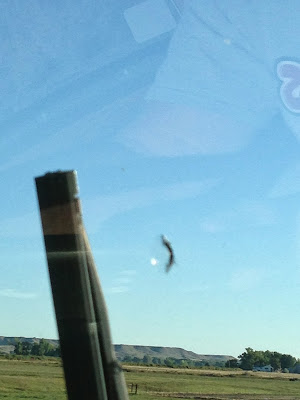 We stopped off at the Walmart in Miles City......our original stopping point for Saturday before the Jello intervened....and did some shopping.  We were there about an hour, so it was a nice rest stop.  From Miles City it was another 76 miles to Sidney...the last 23 on SR 16, which runs along the Yellowstone River all the way up to Sidney.

Over the course of the day we continued dropping in elevation, and ended up at 2,200' elevation here at the fairgrounds, where we will be parked for the better part of a month.  We arrived in Sidney just around 3 pm.  We found out pretty quickly that our decision to get here on Saturday was a good one...we got one of the last 50 amp spots available, and most everyone else who hasn't arrived here yet, will arrive here on Sunday.

We did have to drop the trailer about one hundred yards away, so that's a little inconvenient, but it is what it is.

Saturday and Sunday it will be in the high 70's, low 80's, and then the temps drop into the 60's and low 70's for the foreseeable future.  We spent about 20 minutes filling out employment paperwork, and meeting a few people then settled into setting up our campsite.  Later around 6:30 I got out the BBQ to grill a couple of steaks (rib eye)  that TLE had bought way back in Sioux Falls....over three months ago....they came out great....TLE said I grilled the steaks "to perfection".

The decision to do the last 313 miles in one day worked out well, and since we stopped 4 times to take a break we arrived feeling fresh.  I still don't like long driving days, and at 7 hours this was a long day for us, but sometimes you just have to suck it up and "get 'er done".

Thanks for stopping by!
Posted by Whatsnewell at 8:41 AM