9:06 am - Tuesday - Partly cloudy, 58 F degrees, light breeze, and a day off from work.  Today marks exactly 4 months since we arrived at TVC on April 30th......hard to believe a third of a year has passed.  Today also marks 4 years and 7 months since we began our fulltime life on the road.

I have written several times about our breakfasts at Bert's.....well, in the interests of symmetry we went to Ernie's late Monday morning for breakfast.  Ironically, Bert and Ernie used to own and run Bert's, but at some point in the past Ernie decided he wanted his own restaurant, so he built his two blocks away from Bert's on the opposite site of US-50.  Just as Bert's, Ernie's is also walking distance from TVC...... 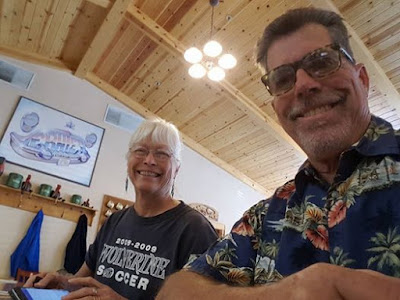 .....not a  surprise that the menus of the two restaurants are very similar, or that they both serve breakfast and lunch all day (6 am to 2 pm).  We had breakfast and referred to it as our 'Happy Anniversary Breakfast'.  Yelp gives Ernie's 4 stars on 245 reviews.  Oh, and by the way, thank you to all who congratulated us on our 45th anniversary both here, and on Facebook.  We were back home by noon and relaxing prior to the beginning of our afternoon shift. 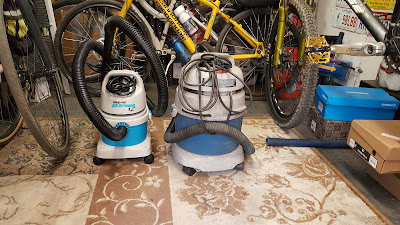 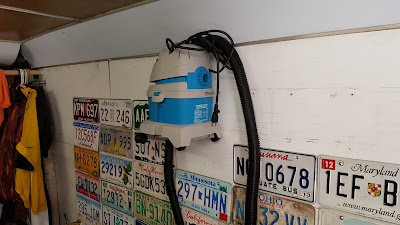 The park is down to 110 occupied sites, and gets quieter each and every day.  It was so quiet that I got out the pressure washer and spent several hours pressure washing the sidewalk which runs along the front of the office/store, as well as the parking spaces, and a few of the throw rugs.  It was actually something I had wanted to do for some time, but there were always too many cars, and pedestrians to make it practical.  I didn't get it all done, but will get back to it Thursday if the conditions allow.

The rest of the evening was very, very slow as one might expect with an occupancy rate of 27%.  No doubt by Thursday we will begin to see the park fill up for the last long weekend of the summer.....Labor Day weekend, but I do not think we will be more than 70% full by Saturday.

As I was driving around the park around 7 pm I realized how balmy the air felt, how happy I am, and how grateful I am to be in South Lake Tahoe the whole summer with my best friend....thanks for stopping by!
Posted by Whatsnewell at 10:47 AM