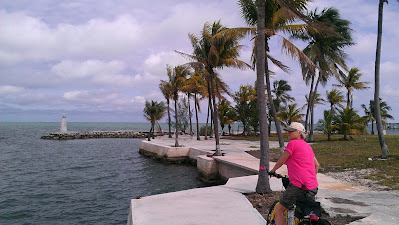 My first, and most important task Monday morning was to remove our shaft driven Leece-Nevelle alternator in order to whisk it off to Turbo & Electric of Phoenix, so they will have as much time as possible to get it rebuilt before we leave.  Of course, we will not be leaving until it is done, but we do need to leave no later than March 7th in order to keep our dental appointments in Los Algodones.
As you all may recall I've already done this drill before.  Yup, last April I helped my brother-in-law, Glenn Parker, to remove the same type of alternator from his 1984 Newell, and then reinstall it (you can read about that here and here.  Glenn's coach is one foot shorter than ours, and that one less foot shows up in his engine bay making it quite difficult to remove, and reinstall it as there isn't enough room for one to get more than one hand on it at a time.  Fortunately, I have that extra foot in my engine bay, and was able to remove mine without any help......being able to get both hands on it simultaneously makes all the difference.  It took me just 20 minutes, start to finish, to safely, and without much effort, remove the big Leece-Nevelle alternator...... 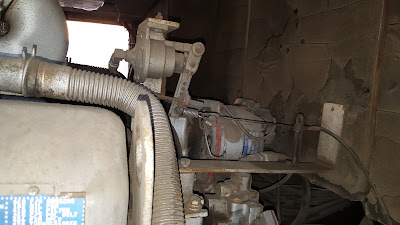 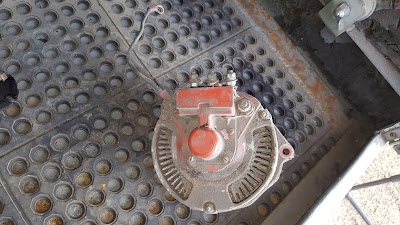 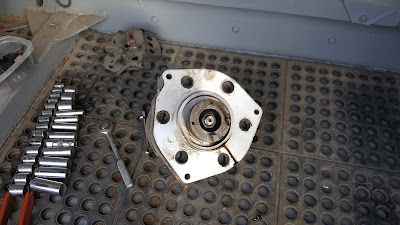 .....there are just three bolts affixing the alternator to its base, and then a ground, and power wire which must be detached from the alternator before removing.
Since we don't have a vehicle with us, and since I also had the new to me Flexsteel driver seat to pick up at YRC Freight in Phoenix (much too big for the VW Beetle) I arranged with my friend Tom to have him drive me into Phoenix in his Ford pickup and trailer to drop off the alternator, pick up the seat, and stop by an upholstery shop to pick up some leather dye for TLE's Ekhornes chair....there are a few places where the dye has worn off the leather, so we are going to re-dye the entire chair, and foot stool.....she'll look brand new by the time we're done!  In order to match the color I removed the leather covering on the foot stool, and took it with me.  We left for town around 9 am, and over the course of three hours we made those three stops (Santa Barbara Upholstery, Turbo & Electric, and YRC Freight), returning home with two aerosol cans of the leather dye, and my new seat just after 12 pm.
I spent some time  after returning from Phoenix cleaning 5 months of salt, and grime off the aluminum hardware for the patio awning, and repairing the 'pull' which we use to deploy the awning, whilst TLE did some reorganizing inside the coach.  Around mid afternoon I suggested to TLE that we bring the Ekhornes chair into the coach so she can use it until we are able to re-dye it....... 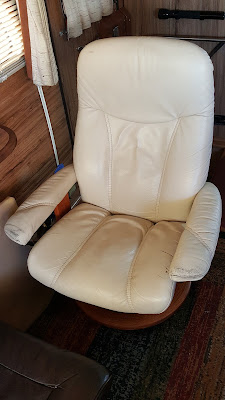 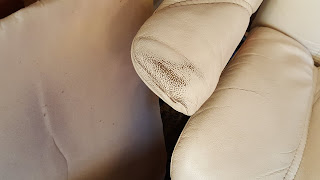 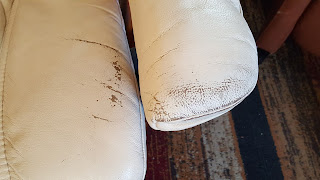 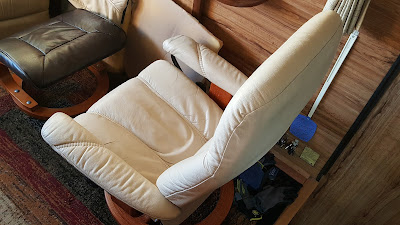 ....over all she looks great...
.....TLE needs to make some minor sewing repairs to the leather cover for the foot stool, so she'll be using the old foot stool from her old chair until then.
On Tuesday I'll spend time removing my old Flexsteel driver seat, and then remove the old tachometer in preparation for installing the new, digital one which I should receive in the next 10 days.
Thanks for stopping by!
When you shop Amazon, please use our link (below) to access their website.......we will appreciate every purchase you make using our Amazon Affiliate link, and  remember, using our link will not add one penny to your purchase, plus we will receive a small commission which over the course of a year adds up to enough to by a tank of diesel for which we thank you very much!
Posted by Whatsnewell at 7:46 AM