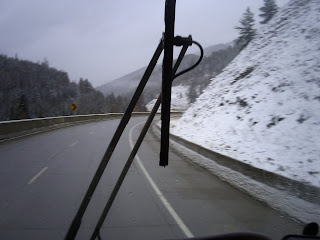 It was so overcast this morning that when I looked at the digital clock on the wall I thought I was misreading it....it said 7:15am......what? I usually wake up before 6.....even after 7am, it was still DARK outside. We decided we would forego making breakfast....OK, Elaine she would not make breakfast this morning...we would go to Lowe's first, and then to Starbuck's for a "coffee of the day" and some pastry and then hit the road before 9am. We got on I-90 around 8:40am, so we had that going for us. The cloud cover was very thick, and it sprinkled on an off for the first 20 miles, then it settled in to a steady drizzle, sometimes hard, mostly just drizzle all the way to Coeur d'Alane. We only had a little over 2oo miles to go today, so we got to play with the windshield wipers for a few hours, and the window washer after each semi passed throwing all kinds of gunk on to 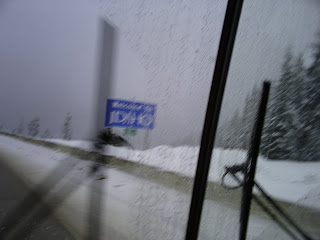 our windshields. The great thing is the "used" window washer resevoir/pump I had installed last summer, but had never had occasion to really use, worked wonderfully. Another great Ebay purchase!

Our first pass of the day was Lookout Pass at about 4,500'.....a little snow, but mostly rain. The second pass of the day was 4th of July Pass, which was much lower elevation, but we had serious snow for about 10 minutes, when as we descended it turned to steady rain again. Both passes had easy approaches, but Lookout had about 6 miles of 6% grade descending.
We stopped at a place called 50,000 Silver $...so you can guess what they specialize in......right, Buck Knives.....OK, sorry, just messing with you....silver dollars. They had several that were minted in the early 1880's. I didn't know that the last silver dollars minted where in 1935. The ones from the 1880's went for over $250, while the ones minted in 1935 were in the $50 range. 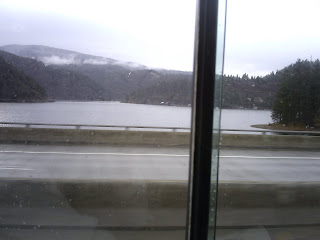 Before we knew it we were passing by Lake Coeur d'Alane to our left. Once through Coeur d'Alane (it sounds nothing like it is spelled), we had to take time to stop at Cabella's right on the Idaho/Washington border. 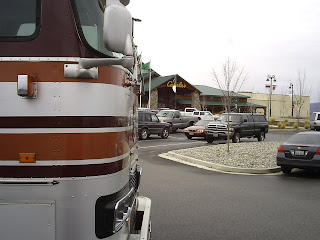 After browsing through Cabella's for about 30 minutes we decided to get back on the road and finish this leg of the trip. Our GPS program successfuly delivered us to the doorstep of my sister's home just south of Spokane about 1pm. I will post pictures of the home, and our present location courtesy parked in their driveway.
Posted by Whatsnewell at 8:56 PM