I was up before 7 am Sunday full of anticipation.  There would be 8 hours of the PGA Tournament to watch plus a few hours of English Premier Soccer.  Talk about overdosing on sports!  It's okay, though, because I've needed a week like we just had doing a lot of nothing, and clearing the cobwebs out of my head.  Watching hours and hours of golf this week has really helped refocus me from the disappointment of our failed work experience at SDC.

They began televising the PGA Tournament at 11 am, and it went until almost 7:30 pm.  Tiger teed off at 2:35 pm and I was glued to the TV, or very near it for the rest of the afternoon.  Between 11 am and 2:35 pm I had a couple of projects I wanted to complete.  One was to fix Tony's Specialized Rock Hopper mountain bike.

Ironically, he had ridden his bike to work at SDC for the first time this past Monday when the five of us decided to quit.  On his way home the cable connecting his GripShift shifter to the front derailleur broke, plus the cable housing completely failed.  He needed a new cable, of which I have literally dozens, and a new length of cable housing, of which I have a dozen feet, or so.....perfect!  I haven't had a bike project since last December at the Grand Canyon where I was able to work on several employees' bikes.  I love working on bikes!  Tony completely disassembled his shifter trying to figure out what was wrong, so it fell to me to put all the pieces back together.  I haven't worked on a GripShift shifter for quite a while, but no problem.....what else do I have to do, right?  I sat out in the trailer fiddling with the shifter for about an hour, finally figuring it out. Once that was done it was just a matter of installing the new cable and cable housing, then hooking it up to the front derailleur and adjusting everything so it would shift properly.

Next up I needed to clean a couple of months of surface rust off my air horns on the front end of my Newell roof.  We, obviously, have been living near the Atlantic Ocean for two and a half months, and the air contains salt, as one might imagine.  Tony gave me a can of 'Never Dull' cotton swabs........ 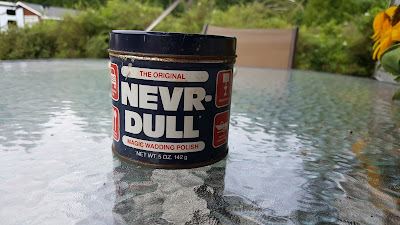 ......the can says it is 'Magic Wadding Polish'.....the wadding looks kind of like cotton balls to me.  At any rate this stuff works like 'Magic' just as the can says!  It took me more time to set up my extension ladder to get up to the roof to polish the horns than it did to remove the surface rust.....didn't they turn out well? 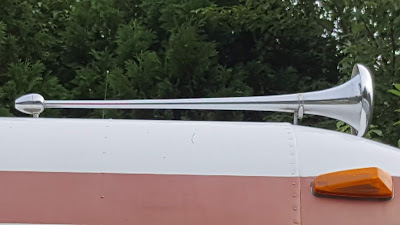 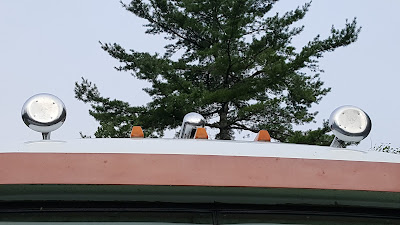 After I finished that project I essentially spent the rest of the afternoon watching the PGA Tournament, including every single hole Tiger Woods played.  It was a very, very exciting afternoon.  Tiger began the 4th round 4 strokes back of Brooks Koepka (pronounced 'Kep-ka').  At one point he was just one stroke back of Brooks, but that is as close as he got.  Nevertheless, the tournament went right down to the last few holes.  Tiger finished at 14 under par, in sole possession of second place, two strokes behind Brooks who finished at 16 under par.  It was the best fourth round score in a Major for Tiger in his career.......6 under par.  It was a truly AMAZING afternoon!

By the time the tournament and the attendant post tournament  interviews were over it was closing in on 7:30 pm....what an afternoon!  Even TLE was in on the action.....she was right there cheering and groaning with me every step of the way.  TLE prepared some wonderful burritos for dinner.....yum.......and then we spent the rest of the evening decompressing from a very exciting afternoon.

When you shop Amazon, please use our link (below) to access their website.......we will appreciate every purchase you make using our Amazon Affiliate link, and  remember, using our link will not add one penny to your purchase, plus we will receive a small commission which helps defer the costs of producing this blog each day.
Posted by Whatsnewell at 5:08 AM