Over the past few weeks I had been puzzled at the lack of comments on my blog posts, especially after my posts about leaving SDC.  Posts like that usually elicit a few responses from my readers.  Then, yesterday, I got a message from 'Blogger' (Google platform I use to publish my blog each day) asking if I wished to continue moderating the comments which come into my blog.  Usually if someone leaves a comment I get an automated e-mail from Blogger very quickly advising me I have a comment to moderate, and it gives me the comment.  Through the e-mail I can decide to 'publish' that comment, 'delete' that comment, or report that comment as 'spam'.  When I got that e-mail from 'Blogger' I got suspicious, and went to the comment portion of the utilities menu finding I had over 30 unmoderated comments!  I went through them and reported about 5 as spam, and then published the rest immediately.  Please accept my apologies for not responding to your comments on a more timely basis, especially those who left time sensitive comments.  I just assumed 'Blogger' would tell me if I had any comments to moderate as it has done for years.  Didn't know I had to 're-up' to continue receiving the notifications.  I won't make that mistake again!  I am now trying to go through all the comments which have been published and reply to them as soon as possible.  If you left a comment, and were looking for an answer please go back and see my responses.

So, I write about that to say this.....there were several comments which gave me ideas for future posts.  One comment asked about the late night phone call I got back on July 22nd, and what the problem was.  So here goes......as I briefly mentioned in my July 23rd post, the ranger phone rang about 11:30 pm.....it was a call from a woman staying in cabin # 304.  She advised she thought they were getting bit by 'bed bugs'.....wait, what?  It took a while for the fog to recede from my brain, so I heard myself saying "Bitten by what?", and she repeated that she and her family were getting bed bug bites.  I advised her I would be over in a few minutes, hung up, and got dressed.

All the while I'm thinking how can this be?  We had a customer in that cabin for the past 2 weeks, and they reported nothing of the sort.  This was the second night the current customers had been in cabin, and they had not complained the first night about anything of the sort.  As I drove the golf cart over to their cabin I'm wondering what on earth I can do at, now, almost midnight.

I arrive to find the wife outside waiting for me.  She takes me inside to look at the sheets on one of the beds, and sure enough there appear to be some sort of almost microscopic bugs crawling around.....at least that is what it looks like....I'm not sure if I am just seeing what she tells me is there, or if I am really seeing bugs.  Their two young children are quite distraught, and the son is asking in a quite plaintive tone "Why is some random stranger in our cabin?"......over the next few minutes he gets more distraught, bordering on hysterical.  I, of course, am feeling quite useless, and decide to walk back outside and call the owners, who live about 5 miles distant.  The wife answers the phone and I relate to her what is happening.  She listens, and then says she will call back in a few minutes.  She is going to call local hotels to see if she can find them a room for the night, so we can deal with this in the light of day.

She calls back in about 10 minutes saying she could only find a room in Ellsworth....everything locally was booked.  I suggested I would have the wife call her back and get the information, which I do.  I then went back to the golf cart to sit and wait for the verdict.  After a few minutes the lady from cabin # 304 comes over to me to advise they will be driving into Ellsworth for the night.  They ask for some large trash bags so put their linens from the beds in to isolate them from the rest of their possessions.  I run over to the bathroom shed to retrieve a few and am back in minutes.  I hand her the bags, bid her adieu, and then head home.  By the time I get home it is going on 1 am.  I finally drop off to sleep around 1:30 am.

So, was it bed bugs, or where they imagining it?  The very next morning the owners had a local pest control guy come to investigate the cabin.  Within minutes he had determined they were not bed bugs, but 'bird mites'.......he found a bird's nest under the eves of the cabin, and came to the seemingly correct conclusion that the bird mites had migrated indoors over the past few days and were the cause of the bug bites.   The bird's nest was removed, and then the cabin was thoroughly cleaned and fumigated within a couple of hours.  The customers returned that afternoon and finished their stay without incident.

So, there you have it.  On the bright side, it was not bed bugs, which would have made for a theoretically embarrassing TripAdvisor review by the customer.  It was bird mites, and was totally the fault of the owners for not removing the bird's nest sooner.  I did not write about it sooner as I could not figure out how to relate what had happened without causing the owners extreme embarrassment, so I chose not to write about it again.  Now that we are no longer there, and due to the circumstances of our departure I really don't care if they are embarrassed, or not anymore.  Stuff happens, and there is no need to make a mountain out of a molehill, which is their proclivity.

Thursday was the final day of the local heatwave, or so we thought.  As it turned out it began to rain about 9:30 am quite hard for almost an hour.  That unexpected rain completely broke the heatwave, and the rest of the day was delightfully cool.  We decided to drive into Ellsworth to visit a few local shoe stores, and outfitters.  TLE needs a new pair of work shoes for our upcoming stint at Amazon.  We visited two mom and pop shoe stores, then the local L.L. Bean store, as well as Remy's (I wrote about this outlet store previously), but TLE did not find anything which satisfied her requirements.  On our way back out of town we stopped at the local liquor store to see if they had anymore of the Leinenkugel Grapefruit Shandy we had purchased there a couple of weeks prior.  As it turned out they had two six packs left, so we quickly grabbed them, paid for them and headed back to the car.  I have been a fan of Leinenkugel's Summer Shandy for years, but rarely ever find their Grapefruit Shandy.  TLE likes it as well, so whenever I see it I buy it.  If you like a light, refreshing summer beer, this is the one for you! 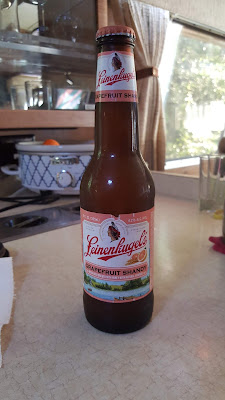 We were home just before 4 pm.....we opened all the windows of the Newell and enjoyed the cool breezes wafting in the windows the rest of the afternoon.  For dinner TLE had been cooking a chicken dish in her crock pot all day (she wrote about this a few days ago).  About 4 pm she took it out of the crock pot to finish it in the oven.  I think it is called Slow Cooker Garlic Chicken.....OMG!  Bacon was involved so you can imagine how good it was!  She got the recipe off a website called "Dinner, then dessert".

We watched a recorded two hour episode of 'Masterchef', and were in bed a little after 10 pm......we have friends coming into town Friday, and they will be here until September 5th, so I am quite sure I will have plenty to write about over the next few days!

When you shop Amazon, please use our link (below) to access their website.......we will appreciate every purchase you make using our Amazon Affiliate link, and  remember, using our link will not add one penny to your purchase, plus we will receive a small commission which helps defer the costs of producing this blog each day.
Posted by Whatsnewell at 5:56 AM