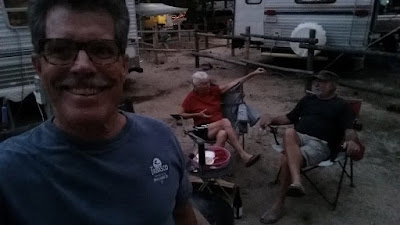 As you may recall, my mother, Virginia, died at age 90 in April, but due to the lock down over the Wuhan virus, no one but my sister, her husband, their two daughters, and the fiance of one of their daughters was allowed to attend the funeral.  Instead the rest of us attended the funeral virtually via ZOOM...... 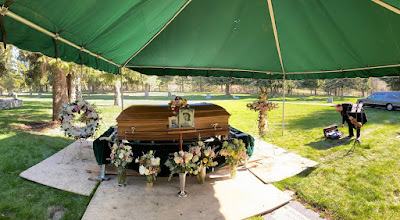 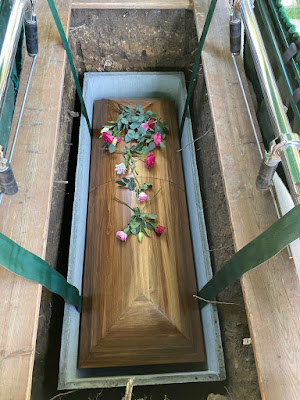 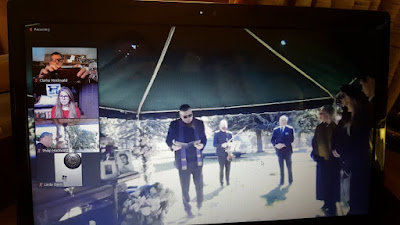 .....even though I understood intellectually that my mother was dead, and buried it did not bring closure.  I kept thinking I needed to call her, and then would remember she died.  For some reason it was not real to me.  At any rate, Sunday we drove into Spokane to my sister's home, and then we drove over to the cemetery where she is interred to visit the grave site..... 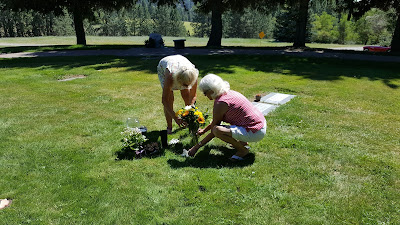 TLE and Hilary placing flowers at the grave

.....there is no headstone yet as in Washington State the making of headstones was considered (then) to be a non-essential business, but now they are once again open and making headstones....we should have my mother's sometime in September..... 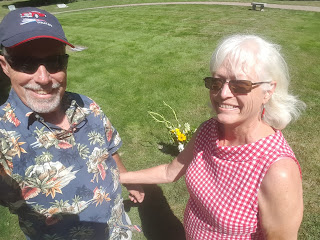 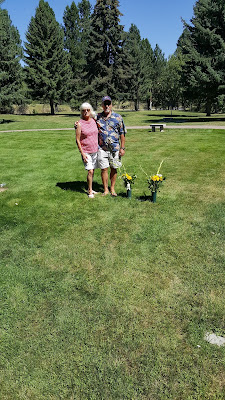 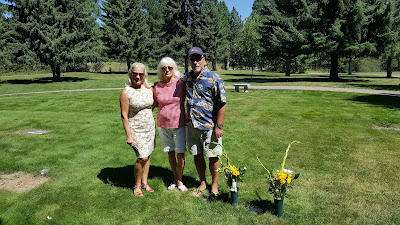 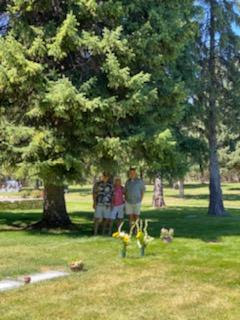 Standing in the shade courtesy my brother-in-law, Bob

.....the trees around the grave site had limbs down to the ground back in April making it impossible to stand in shade when you might visit on a hot day, so Bob, with the permission of the grounds keeper removed many of the low hanging limbs to create a shady area in which to stand......thank you so much for your kind consideration!

Bob and I drove to the cemetery separate from TLE and Hilary.  Why?  Well, a couple of years ago Bob acquired a 1957 Austin Healey 100, and he had promised me a ride in it when we came to Spokane.  As a bonus he let me drive it home....... 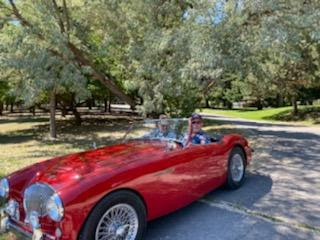 ......it has a 4 cylinder engine with a 3 speed stick.  The wire wheels are chromed, and the car is immaculate.  This car was owned and restored many years ago by my other brother-in-law, Elliott (married to my sister Jill).  When he died of cancer a few years ago Bob bought the car from my sister as she was liquidating Elliott's estate.   Bob took me on the round about way home, and before long we had covered over 15 miles of beautiful winding, hilly roads......what a beautiful machine!

We arrived back at their home in time to see the final 3 holes of the current PGA tour event (St. Jude Classic) won by Justin Thomas in the end....defending champion, Brooks Koepka, came in second.

We had a wonderful dinner with Hilary, Bob and their daughter Stephanie....the wide ranging conversation continued unabated until after 8:30 pm when we decided we needed to begin the 45 minute drive back to our home in Coeur d'Alene.  Now I have seen my mother's grave, and now it is real, and now I have closure.

When you shop Amazon, please use our link (below) to access their website.......we will appreciate every purchase you make using our Amazon Affiliate link, and  remember, using our link will not add one penny to your purchase, plus we will receive a small commission which over the course of a year adds up to enough to by a tank of diesel for which we thank you very much!
Posted by Whatsnewell at 7:41 AM