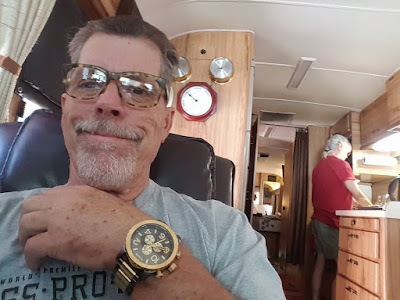 Wednesday was my longest working day since we arrived in Coupeville on the 14th.  During that 4.5 hours I managed to install 10 new planks on the fireplace deck, and two on the front porch deck....... 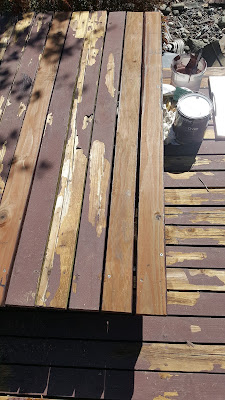 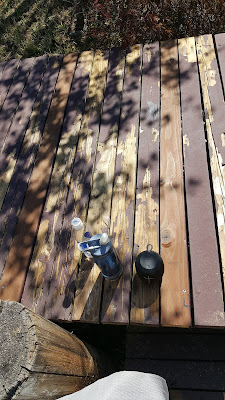 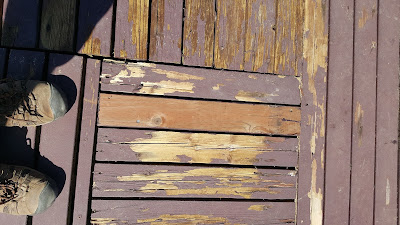 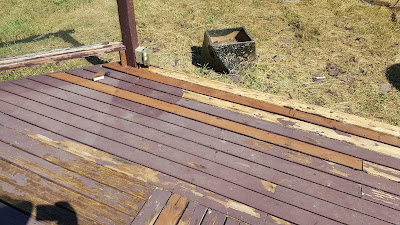 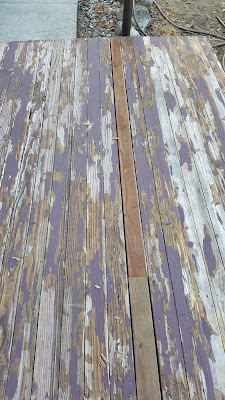 .....I painted the sides of the 2x4's before installing them as I will not be able to get at the sides after they are installed, and screwed down....... 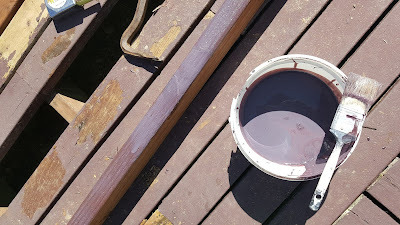 ......by the time the planks had been cut and fitted it was around 2:20 pm.  Two of the planks which I installed on the front porch deck had to be 'ripped' to a smaller width.  In all I took 1/2" off the width of each board before they would fit the space.  I also spent time repairing some of the molding on the glass window frames on the south side of the deck with finishing nails, and used a paint scraper to remove the loose paint.  On Thursday I'll spend most of my time finally sanding the planks on both decks in preparation for applying the stain on Friday....at least I hope I will be done with the sanding/scraping on Thursday!

While I was occupied with the work on the decks TLE went into town to do some shopping at the local thrift store for pants.  Why, you might ponder?  Well, on Tuesday morning we completed our phone interview for a winter job at an RV park located on the Oregon Coast between Newport and Waldport.  I first noticed workamping jobs being advertised for this park back in early July just about the time we had been discussing our plans for the winter.  We love the southern portion of the Oregon Coast, and have talked on and off over the past couple of years about getting a camp host job somewhere between Newport and Brookings.  I finally submitted our resumes for consideration on August 4th, and have been exchanging emails with Michelle in their office since then culminating in the phone interview on Tuesday morning.  We were officially hired at the end of the phone interview and will be arriving there by September 15th, which means we will be departing Coupeville around the 8th of September via the Port Townsend Ferry.  We'll take a week to cover the 442 miles separating us from our winter job once again traversing US-101 on the Olympic Peninsula.


When you shop Amazon, please use our link (below) to access their website.......we will appreciate every purchase you make using our Amazon Affiliate link, and  remember, using our link will not add one penny to your purchase, plus we will receive a small commission which over the course of a year adds up to enough to by a tank of diesel for which we thank you very much!
Posted by Whatsnewell at 7:43 AM