Deep in the Heart of Texas

We woke up Saturday morning around 6am, and were on the road by 8:30am. We decided we needed to be in Bullard, TX by Sunday evening, which meant 2 long driving days.....something I don't do, and specifically don't like to do, but there is a first time for everything. We stopped at a Super Walmart in Deming, NM to do food shopping....our fridge was bare, and it was time to stock up!
Our goal for the day was rather optimistic....Midland, TX.....565 miles away from our starting point....the longest day I had done in the Newell was a little over 400 a couple of times, but this was new territory. I wish we had started earlier, because with the change into Central Time we lost another hour, which meant that even though we did not stop too much we didn't arrive in Midland until 10pm Texas time.....we headed for the local Cracker Barrel restaurant and caught a very late dinner there (they are open until 11pm on Saturday nights), and were in bed by 11:30pm......and awake again at 4:30am, and on the road by 5:30am.....we had 453 miles today, and I didn't want to finish in the dark AGAIN! The great thing about Cracker Barrel Restaurants that we like is you can park overnight in their parking lots, which we did this night, and were not disturbed.
Today, Sunday, we made good time and reached Bullard, TX around 3:30pm. The early start paid off, and we arrived with lots of daylight sill left in the sky! The drive from Mesa, AZ to Bullard, TX was completely without incident......UNTIL we parked the coach in my sister-in-law's driveway.....as I exited the coach after parking I smelled coolant....not a smell you want to greet you....I opened the driver side engine compartment door and saw coolant gushing out the back of the water pump for the engine! Apparently, just we we were parking an internal seal in the pump failed completely.....I quickly grabbed a 5 gallon bucket and opened the pet cock valve on the bottom of the radiator and drained the coolant below the level of the pump so it would no longer drain out there. I think I lost 5, or 6 gallons, but save another 4 by draining the radiator as fast as I could. Tomorrow I will locate a replacement pump. We are so thankful this happened here, and not somewhere in the vast West Texas landscape 100's of miles from anywhere. If you've got to break down it's good to do it in your own driveway, or in the driveway of a relative! If we had taken more than the 2 days to get here who knows where we would be stranded, and how much it would have cost to get back on the road. Here I can do this myself. I have located a pump, and will replace it in the next couple of days. 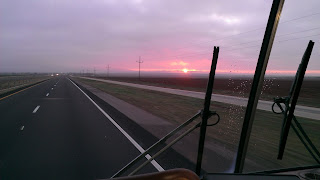 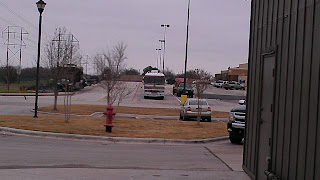 Parked at the Cracker Barrel in Abilene for breakfast 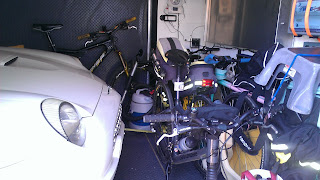 What the trailer looks like packed with the T-Bird 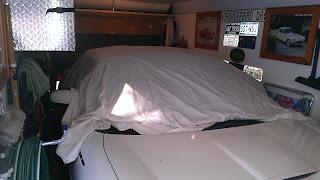 It is a TIGHT fit!
Thanks for stopping by!!
Posted by Whatsnewell at 8:49 PM