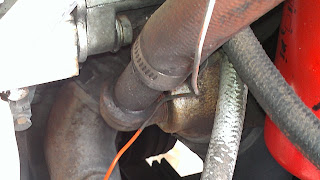 The culprit hiding behind those hoses!

Elaine's sister is a flight attendant for U.S. Air, and she was scheduled to leave Bullard to drive into DFW for a four day trip at around 11am. Our two shipments (water pump and Dometic fridge door panels) were scheduled for delivery by the end of the day YESTERDAY! We could see on the UPS site that both packages had made it to Mequite, TX at 4am yesterday morning, and there they sat all day without moving an inch. At any rate, since we wanted to be sure someone was here to receive the deliveries in case signatures were required we left early to drive into Longview to pickup the 12 gallons of Power Cool coolant to put back in the engine after I R&R (remove and replace) the water pump. The drive in was very windy.....I heard later that Colorado got hit by vey high winds, and perhaps we were just getting a little of that. We made it back around 11:30am and spent the rest of the day playing the waiting game with UPS. 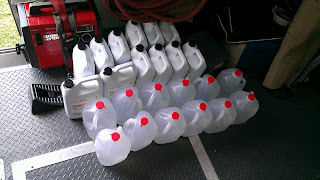 The coolant and distilled water awaiting their fate.

While we waited Elaine continued her daunting task of scanning a few generations of family photos into digital format. Initially, before we left California, she was working on our family photos going back to 1971 when we were married. Over time old photos from Elaine's childhood in Florida began to surface, and now that we are in Texas she is deep into scanning pictures from both her mother's side of her family, and her father's side of the family.

So, while we "waited" she continued on that task, and I turned my attention to getting ready to receive my water pump. I had to finish draining the rest of the coolant from the engine block, radiator and other systems within the coach. That amounted to another 10 gallons, in addition to the 12 gallons we had already lost on the ground, or drained to stop the pump from dumping anymore on the ground....that, my friends, is a lot of coolant! Additionally, Elaine's brother, Read, who also lives in Bullard, noticed that grease was leaking from one of the trailer's four hubs. He pointed out that usually that means the hub has overheated for some reason....worn bearings, lack of grease, or electric brakes rubbing when said brakes are not engaged. He recommended I pull off the tire, and brake drum to find out which of those scenarios applied. I carry 2 20 ton bottle jacks, so I pulled out one and jacked up the rear of the trailer to get at the tire and brake drum. In less than an hour I had everything off and discovered that one of the brake shoes was out of adjustment and had been rubbing against the drum causing the excess heat, so I will need to replace those brake shoes, have them properly adjusted, and then repack the bearings with grease. Doesn't look too complicated, and Read gave me a referral to a local trailer supply place where his business gets their trailers serviced.

Around 4:30pm I rechecked the UPS website to find that our two shipments had not moved an inch all day, and were still sitting in Mesquite, TX. We decided there was no way we were getting our items then, so we went out to a local Mexican place called Chuy's for dinner. We got home around 7pm and I got set up to SKYPE with various family members. The night before Elaine and I had SKYPED with our daughter Meredith, and our "adopted" daughter Amanda, who lives at the home with Meredith and Tim. Later I got Sharon, our youngest daughter, on SKYPE and we talked for a while. SKYPE is soooo cool. It's the next best thing to giving your kids a hug. Last night it was time to visit with my oldest son, Chris, and his family. We talked and laughed for 30 minutes or so...it was great to see our grandson, Christopher....he is such a ham....lol! After that I called my sister Jill, who lives near Ann Arbor, Michigan, and we talked for 30-40 minutes before my voice began to take on a raspy quality. I'm going to try and connect with my brother Philip tonight. SKYPE is such a wonder tool for staying connected with family and friends, and I am so grateful for this amazing technology! Mom, if you are out there, you need to install a video cam so we can talk "face to face"!

Just after we retired for the evening UPS updated their website to show that our two items had been transferred to the local Tyler shorting facility, and as of 4am this morning they are OUT ON THE TRUCK FOR DELIVERY! So, another day of waiting is upon us. If the weather, which has gone from a summer like 85 degrees yesterday to blustery and cold today (may not hit 60 today), and UPS cooperate we'll take another bike ride today. 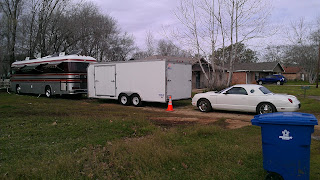 Boy, do we take up a lot of room!
Life is good! Thanks for stopping by!
Posted by Whatsnewell at 7:08 AM