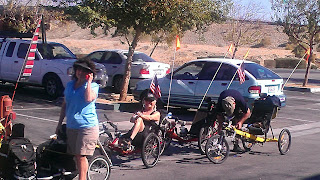 Saturday, February 5th - We unhooked the Newell's umbilical cord around 8:50am, and drove down the hill (Jojoba Hills) to the boondocking area where we "dropped" our trailer when we came into the park on Monday. Today we were going to hookup the trailer, and then, for the first time in a long time, load the T'Bird for travel. As you will recall we spent parts of 3 days reorganizing the "stuff" inside the trailer, which included re-securing a number of items, and getting rid of others. We donated a large bag of clothing to Goodwill in Temecula we knew after a year at Rancho Jurupa we were not going to use. The loading went fine, I had forgotten how tight things can get in that trailer with the car in....haha! We had decided we would drive the 12 miles back to the outskirts of Temecula and find a large parking lot near Stater Bros. (SoCal supermarket chain) to park and check the load inside the trailer for "movement" while Elaine went in and did some shopping. Everything looked good, with the exception that the T'Bird had moved a few inches forward.....this is typical as it seems to find it's own sweet spot, and there is plenty of room in front. So I tightened up the large cargo straps front and rear and we headed on to I-15 which we would take north to CA 60, and then east to join up the I-10 eastbound traffic.
The drive was delightful with temps in the low 70's until we descended into the Coachella Valley where they rose slightly to the high 70's...this is why people flock to this area in the winter. Our destination for the day was Indio, CA where my good friend Claude Banker lives. I have done a number of extended bicycle trips over the years with Claude, as well as backpacking in the Sierra's. Our longest bike ride was 465 miles starting at his home in Indio and heading north through Yucca Valley into the Mojave National Preserve, continuing north into and out of Death Valley, ending at Lone Pine, CA, I kept a blog of this trip which can be found at Mystical Mojave Meanderings. We arrived at Sun City, where Claude lives, around 1:30pm. We are parked down the street from his home about 100 yards where there are no driveways to interfere with....we are a little over 60' long and these lots are not that wide...lol!
The solar panels are tilted toward the southern sky to catch the sun's rays as we are off the grid for two days! We will watch the Super Bowl with Claude and his wife Lindy, then then continue our trek southeast into Arizona on Monday morning.
Sunday, February 6th - Today, before the Super Bowl comes on we'll take a "trike" ride with Claude and Lindy to breakfast, and around town. I'll post some pictures of us on the trikes...you'll get a kick out of them!
Thanks for checking in!
Posted by Whatsnewell at 7:59 AM