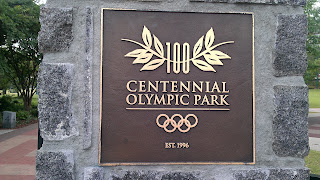 After the sensory overload of historic sites in Savannah we were somewhat underwhelmed by Atlanta. Of course Atlanta typifies much of what I have come to dislike about heavily urban cities. I'm not saying it isn't beautiful, and I'm not saying the skyline is not very interesting.....much of it is just too urban for me. Nevertheless, we decided to move our view from the southeast side of Atlanta up to the northwest side where we would park, and unload the T-Bird and drive into Centennial Olympic Park, the home of the Summer Olympics in 1996.

We arrived at the Walmart Supercenter around 11am and were immediately uncertain whether we would be allowed to stay there overnight. There were a number of signs seeming to indicate that no overnight truck, or RV parking was allowed, however, the RV part had been spray painted out.....we weren't sure if some vandals had done that, or whether it was deliberate. We found a level spot to park and were going to go into the store to find out when a security guard suddenly appeared outside the driver's window. Looking down from my high perch I couldn't tell immediately if I was going to speak to a man, or woman as the guard was in full uniform with a hat, had no makeup, and short hair. Of course, when I have a 50/50 chance of being right I am ALWAYS wrong...even as the words "good morning sir" left my mouth and were still hanging there in the air, I realized I had made a mistake, because she began to speak at the same time. So, here I am, trying to be polite, and I have already insulted the security guard by addressing her as "sir". I thought she was telling me I had to move on, and I asked "can we at least just park here for an hour?", thinking we would have to find another parking place somewhere else. She replied, "Honey, I don't care if you are here for a week, you just can't park there! You need to go park over there" pointing to the truck ghetto on the other side of the lot...there were a lot of semis parked there. She said, "we like to keep all the RV's and trucks in that area. You're welcome to stay for as long as you please".
Well, OK, that is settled....haha! So, we moved our coach over near the idling semis and reparked and releveled (by early evening all the idling semis had departed, leaving us with a quiet evening). Then we opened up the trailer and unloaded the T-Bird for the day. This is not something we normally like to do, but is was 15 miles one way into Centennial Olympic Park, which would be 30 miles round trip with the weather looking like rain any time. 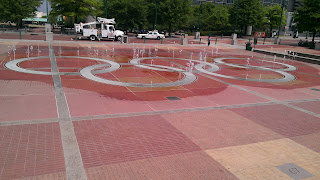 It only took us 25 minutes to get into downtown and park. As we walked into the park we could hear jazz music off in the distance. As we got closer we saw that there was a lunch time free concert in progress, so we meandered over there and sat down in the shade to listen and enjoy for about 30 minutes....what a nice start to our touristing day! 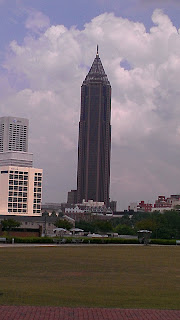 Bank of America building....tallest in Atlanta 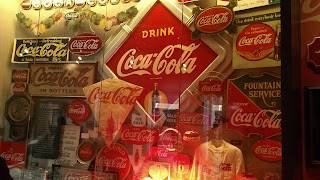 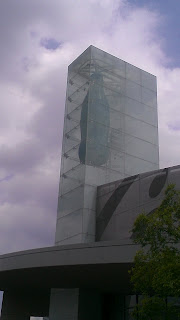 Eventually we wandered off and down through the park just enjoying this large open space in the center of a large urban setting. Eventually we came to the World of Coca Cola building, which is like a kind of gaudy industrial museum housing the history of Coca Cola, including the secret formula in a large, seemingly, impenetrable vault, rooms and rooms of Coca Cola memorabilia as well as animated hosts who want to tell you everyting about Coca Cola. Even though it was a little over the top, and a little over priced at $14 per head (that price is with our senior discount), we enjoyed the hour we spent there, and we did learn a lot about Coca Cola we never knew. 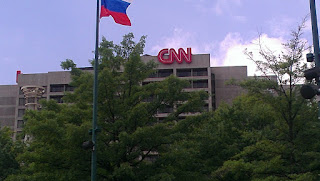 Eventually we began our walk back to the car, and I saw the CNN building off to one side of the park.....I had forgotten their headquarters was in Atlanta. 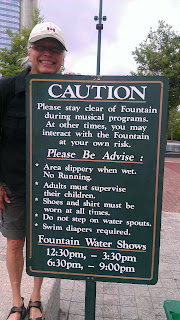 Both Elaine and I got a real kick out of the first paragraph of this sign by the Olympic Rings fountain (see picture above). We, naturally, decided not to INTERACT with the fountain.....lol!

We arrived back at the Walmart around 3:30pm and had some snacks before settling down to read for a while....around 5pm I noticed the temperature was dropping and the clouds were getting very dark. I suggested to Elaine that we should load the car back into the trailer to avoid doing it in the rain......we had barely closed up the trailer when the lightning, thunder and rain began with a vengance.....once again I'm glad I listened to that small inner voice! We were able to Skype with our daughter-in-law, Rochelle (married to our oldest son Chris) and get updated on the goings on in their family. We are hoping our grandson, Christopher, will be able to fly up in June while we are in Spokane and visit with us for a few days.

It rained steadily the rest of the afternoon, and evening, and is still raining as I write this blog update at 8:30am. We'll wait until it lets up before heading furthe west to our next stop near Heflin, AL where we will spend a couple of days visiting with old friends from our college days.

Posted by Whatsnewell at 4:59 AM