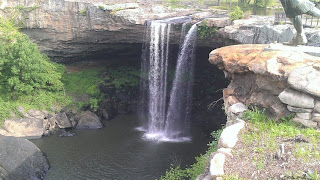 Nocculula Falls, Gadsden, AL
I was looking for some out of the way place, kind of like DeFuniak Springs, FL a few weeks ago, to overnight and charge our batteries back up, and I found it in spades! Gadsden, AL is the home of Nocculula Falls Park, and incorporated into that park is this really cool city owned campground with long pull through spots that allowed us to pull in and NOT drop the trailer.....AND, get this, our 70 foot pull through spot, which came with full hookups and cable TV, was $19 per night! Gadsden is kind of northeast of Birmingham, and the road up from Interstate 20 (431) is a cake walk.....4 lane divided highway with almost new pavement.
We left Ranburne and our college friends around 10:45am to do the 80 miles up to Gadsden.....one thing I didn't mention above is that the long pull through sites are first come first served, so we needed to get there early to snag a spot. The drive was totally uneventful other than the perpetual construction work going on along the Interstate in this area between the Georgia border and Birmingham.
We arrived at the Nocculula Falls (named for a Cherokee Indian princess who leaped to her death to avoid marriage to someone she didn't love) campground around 12:30pm, and were promptly processed and sent on our way to P-5 where we promptly plugged in to begin charging our depleted batteries, and then walked up to the laundry to do our overdue laundry that had been collecting for the past 9 days. They only charge $1.00 per load to wash and dry....most places charge $2.00+. 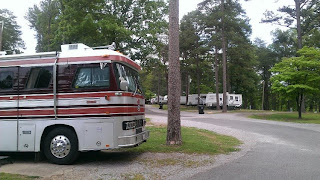 P-5
After getting the laundry done we decided to take a bike ride to a state liquor store about 6.5 miles away....easier said than done. One of our complaints about the South is that there are very few actual bike lanes, paths, etc. to be found. Gadsden is no exception. After riding 2.1 miles back to HWY 431 where we had to ride another 4+ miles along a busy arterial highway Elaine said "Thanks, but no thanks!".....I gave her the key to the coach and she returned, and I continued on.....I've been out of Scotch and Brandy for a week...a man can only take sooo much. Actually, after another 1/4 mile the 3rd lane on HWY 431 turned into a breakdown lane and the ride the rest of the way was not too bad. I arrived at ABC Beverages (state owned) in another 30 minutes after I left Elaine. I was surprised at how expensive liquor is in Alabama! A liter of Dewars White Label costs us around $29 in SoCal....in Alabama it is $49! Ouch! I opted for a quart size for $29....ouch! On the way back it began to sprinkle, but never really got serious...I arrived back at the coach around 4pm with my prizes...lol!
We lazed around the rest of the day reading and watching our batteries recharge......which, by the way, was taking way too long. After about 6 hours they should have been back up in the mid 90% range, but they were barely to 87%. Hmmmm....well, maybe overnight they'll get there.
The next morning the percentage had only climbed up to 88....now that's not right....something must be wrong with the converter/charger....of course my mind goes immediately to "it's broken...what's it going to cost to replace, and how are we going to keep the batteries charged with no sun?" Well, I went out to look at the converter/charger (Progressive Dynamics 3 stage) to see if it was plugged in properly. Then I remembered that there are 3 30 amp fuses on it, so I unplugged the charger and began pulling out each fuse....the first one looked deformed, and it appeared the link had been broken, so I replaced it, plugged the charger back in and what do you know? The percentage of charge began climbing, and within 2 hours we were at 100%
We only had 140 miles to go today, we doddled around until 11am and then began getting ready to go....check out is Noon in this park. We pulled out at 11:56am and headed over to I-59 to begin our trek north into Tennessee, but not before cutting across the corner of Georgia once again. The drive was specatular.....we began seeing mountains, and valleys...at one point we got up over 2200' elevation, and were actually driving in the clouds....what a "trip" after weeks of being near sea level and seeing nothing but flat as far as the eye could see! One stop was just after I noticed my recumbent trike, which is mounted above the tool box on the front of the trailer, was wobbling terribly from side to side. I pulled over on the shoulder to see what was wrong and found that one of the two "U" bolts holding it fast to the tongue of the trailer had snapped and the other was close to snapping....another mile and that trike was toast! So thankful we have a rearview camera that let's me keep an eye on the trike! Fortunately I had two spare "U" bolts so Elaine and I installed those and were on our way again in about 30 minutes.
Our destination was Manchester, TN this day and we made it by 3pm after a couple of stops to eat a late lunch and just rest and enjoy the scenery a little. We first pulled into the local Walmart Supercenter. It was nice enough, but just seemed to busy with trucks, so we moved up the road 4 miles to the Cracker Barrel...what a surprise, right? It was much quieter and less crowded, so we settled in there for the night. I watched part of the Yankee/Boston game....Boston was up 9-0, and ended up losing! Then watched parts of two NBA games and decided to read, which I did until 10pm before getting tired and hitting the hay. Elaine followed shortly thereafter.
The outside temperature last night got down to 43, and inside our coach.....58.....that's the coldest by far in the last 6 weeks! Had to turn on the generator to run the two electric heaters, plus the central gas heater for the bathroom....that toilet seat was COLD!
Sitting here now typing and watching the puffy white clouds drift by and thinking of hitting the road within the hour. We will drive around 200 miles today up to Campbellsvile, KY to pay a visit to the Amazon Fulfillment Center where we will be employed this October. We'll check out the facility, and the RV park where we will spend 2 months. Pictures to follow!
Thanks for stopping by!, 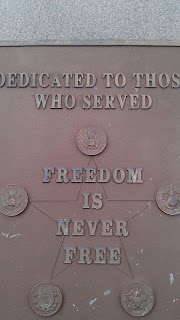 Taken at a local War Memorial near the park
Posted by Whatsnewell at 5:38 AM