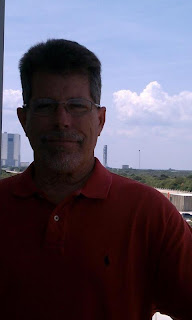 I have always wished that I could have seen one launch at Kennedy Space Center in my lifetime, in person. I still remember watching Neil Armstrong take "the first step" on the moon on my good friend's color TV.....not many had color TV's back in the late 60's. I still get choked up at the end of Apollo 13 when the astronauts return safely to earth, just narrowly escaping certain death....I remember watching that live on TV so many years ago.
We finally escaped the wonderful gravitational pull of Stuart, FL and headed north with our tour tickets in hand to visit the Kennedy Space Center in person for the first time in our lives. At $45 per person it seems over priced......UNTIL you start the tour in the IMAX Theater and see the movie about the building of the ISS....International Space Station, and about the Hubble Space Telescope. If all I had seen were the two movies they show every hour on the hour it would have been worth the price of admission, but that was just the beginning. We took a multi hour bus tour of the Cape Canaveral space port, some of which is self guided, and some of which the bus driver provides narration to what you are seeing, and some provided via video in the bus, and at each stop on the tour. We sat in a theater where they had recreated the Launch Control Center for the moon launch.....wow! We experienced a Space Shuttle launch in their very cool simulator....an on and on it goes. This is a must stop for anyone who visits northeast Florida!!! 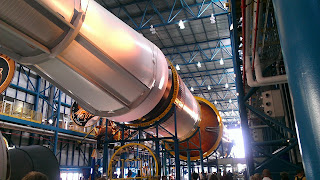 Just being able to see the Saturn 5 rocket with all of the moon landing hardware attached (see above) is astounding. At over 500' long it is amazing in size and complexity. It has over 1,000,000 systems. To think that when John F. Kennedy announced in 1962 that we would put a man on the moon and return him safely to earth before the end of the decade none of this technology existed.....NONE! They used computers as big as box cars, and slide rules (calculators did not exist then, either) to develop and build this amazing rocket. 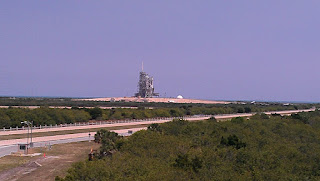 To be reminded that launch pad 39 (seen above) is the only launch pad in the world to have launched men into space who set foot on the moon is awe inspiring. 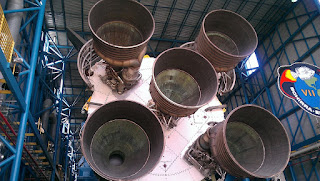 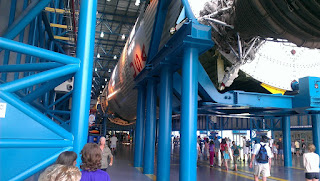 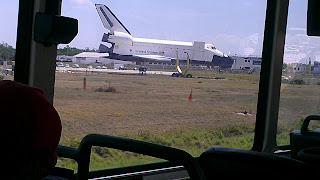 Even the Space Shuttle, which has been retired, is still ahead of its time. Without it the ISS would not exist in its present size and form. 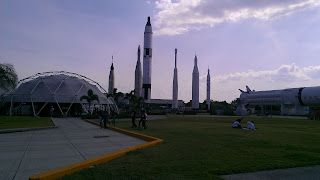 The rocket garden (see above) is a wonderful tribute to the development of our space program in less than 10 years. I was impressed by how small the initial rockets were that propelled Alan Shepherd and John Glenn into space compared to the Saturn 5 rocket that sent men to the moon. The courage of these men who were in the most literal sense of the word "test pilots" flying essentially unproven technology on those first short shots into space is beyond my comprehension.
No doubt you can tell I am still blown away by what I saw yesterday......I am humbled by the dedication of the thousands of people it took in the 60's to fulfill a vision held by JFK to put men on the moon in just a few short years. We hear politicians today make wild promises that we know we will never see fulfilled, and it is easy to be cynical about government, and deservedly so. The space program is one of those rare instances where government promised, and actually delivered in spades. What an amazingly uplifting day. I think we started our tour around 11am, and returned to our coach around 5pm......and we could have easily spent another day. 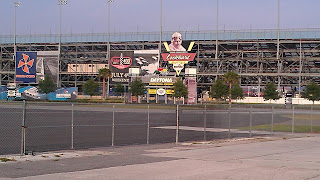 We left KSC around 5:30pm to head over to Titusville where we hoped to dry camp at the local Walmart Supercenter, but upon arrival we just didn't like the vibe of the area, and parking lot, so we hopped on I-95 northbound while Elaine searched ahead for other possible dry camp spots for the night. We finally settled on a Cracker Barrel Restaurant (they are very RV friendly) right next to Daytona International Speedway.....what a perfect spot. This is one of the best dry camp spots we have found.....just behind the Walmart Supercenter in Daphne, AL. Of course none of the dry camp spots we have stayed in compare to any of the courtesy parking opportunities we have had in the last two and a half months. We are still in withdrawal after leaving Paradise Club and the Garden Shower.....lol!
That's it for Tuesday.....thanks for stopping by!
Posted by Whatsnewell at 2:05 AM