Craters of the Moon 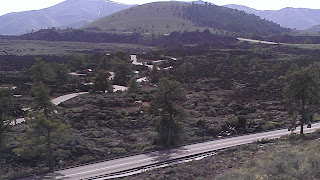 Our intent last Saturday was to find a good spot on some BLM land (Bureau of Land Management)  near the Snake River to spend a few days.  Typically you can stay on BLM land for free, or a nominal weekly fee.  Saturday morning we departed Snake River RV Park and headed over to the Walmart to park, and unload the Thunderbird so we could drive up to the BLM land and inspect the sites available.  It was about 27 miles out to the area in which we wanted to camp.  As it turned out the BLM dispersed camping area was up a long dirt road, which became washboardy after a while, and there was no way I was driving the coach in there.  It was a nice round trip drive, but a total bust as far as our plans for the next few days, so we tucked in our tails and headed back to Idaho Falls to regroup.

Our original travel plans after staying at the Snake River for a few days was to continue north on I-15, but now that our Snake River plans had gone up in smoke I started taking a look at US 93 which pretty much parallels I-15, but is on the west side of the Bitteroot Moutains.  On top of that just southwest of Arco, ID is Craters of the Moon National Monument.  It took Elaine about half an hour to switch her mindset, but eventually she came around to my idea and we headed west of Idaho Falls on Idaho 20 to Arco, and then south on US 93 to Craters of the Moon.  What a cool place this turned out to be!  Since this is a National park we can use our Golden Age Passport cards which waives the entry fee of $8, and cuts in half the daily camping fee.  So, we signed up for 3 days in the campground $15) and parked our coach in site #7. 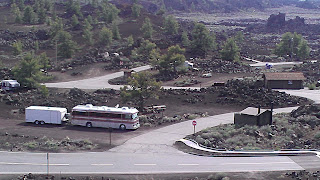 By the time we got settled in it was after 4pm, and a little windy, so we just relaxed and enjoyed the afternoon reading.

Sunday morning we got our road bikes out and decided to ride the 8 mile scenic loop.  The ride was great, but we had no idea how much elevation we would gain.....I think we were up to 6,500' elevation at one point, which means a lot of climbing.  We both did great.....I'm always glad we both have mountain bike gearing on our road bikes.....makes this kind of ride much more manageable.  Along the loop are several walking self guided tours, which we walked.  We ended up riding just under 11 miles, and walking about 4 miles, but it was a very enjoyable day of site seeing, and, little did we know, it wasn't over. 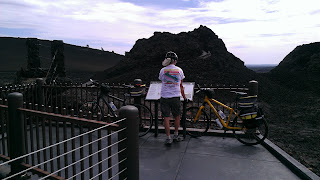 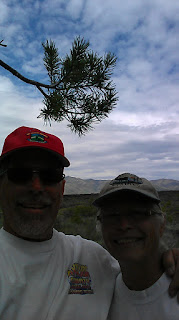 We got back to the coach around 3pm, and I took my cell phone up the hill (see picture below) to get a cell phone signal so I could check my voice mail, e-mail and any other kind of mail I might have.  Over the 3 days we spent at Craters of the Moon I walked up this hill 8, or 9 times.  The picture of our coach above was taken from the top of this hill.  Once on top of the hill my cell signal went from zero to 5 bars. 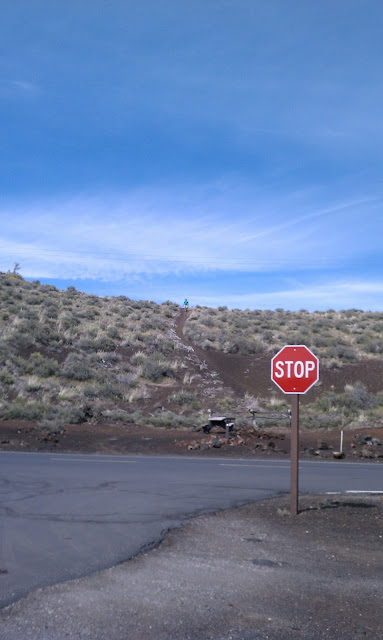 After taking a nap we went outside and sat in the shade of the coach watching the day wind down.  Round 6pm a ranger came by and told us there was a partial eclipse of the sun occurring, and we could come up to the Visitor Center to watch it on the "sun scope".  The eclipse was supposed to reach its peak around 7pm, so we took our time drinking our Scotch, and smoking a couple of small cigars before we walked up to the center. 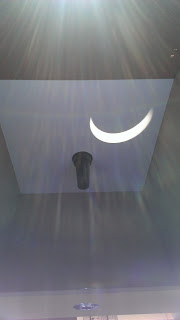 Our timing was perfect as we arrived just as the eclipse reached its peak....the picture above is the eclipse viewed through the "sun scope', which protects your eyes.  The picture below is pretty cool......I took a picture of the sun with my phone camera, and was surprised to see afterwards that the lense had captured the eclipse.....see the red spot just below the sun with the eclipse in it....I don't know how this happened, but ended up being a very cool picture totally by accident.  I was just taking the picture as a contrast to the "sun scope" picture! 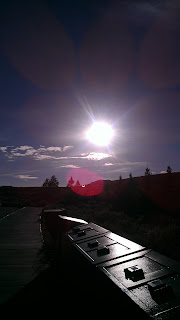 One of the hikes we took on Sunday was to see the "tree molds".  The hike was 2 miles round trip, and the picture below is of a mold made of a fallen tree when the lava was flowing  a couple hundred thousand years ago! 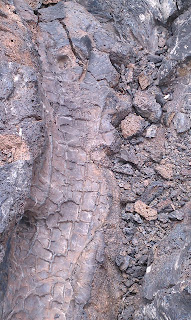 There was one hike we wanted to take after our bike tour on Sunday, and we headed out on foot from our camp site tohike the "North Crater" trail.  It was 1.8 miles long, and turned out to be quite challenging. 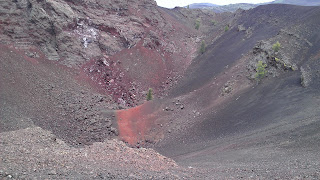 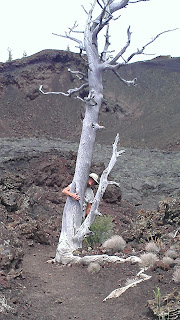 This tree obviously grew up and died since the lava field was active....completely bleached white.....not my wife, but the tree....haha! 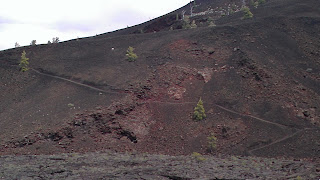 This is a picture of one section of the trail viewed from across a lava field that we had to cross about half way through the hike.  Elaine did great on the hike in spite of the fact we ended up doing it during the heat of the day.  We got back to the coach around 3pm, and quickly took showers to wash the trail grime off our bodies, then headed outside for happy hour again.  Around 9pm the wind came up and rocked the coach on and off all night.  It appeared that the wind preceded a front moving into the area.


Well, that was another 3 days in the life.....we loved our three days at Craters of the Moon, and highly recommend it.......thanks for stopping by!
Posted by Whatsnewell at 5:24 PM