Originally we were going to leave South Jordan Thursday, but I didn't feel well Wednesday afternoon when I would have been getting things ready for moving, so we decided to leave Friday.  It was too hot to leave on Thursday anyway, and Friday looked to be cooler.  Well, it was a lot cooler......cold, windy and cloudy enough to rain.


I was up at 6:30am, and girding myself for the final packing of bikes, and the car.  We had to back the coach out of the driveway, then hook up to the trailer, then load the car, and the trike.  We had no sooner finished loading the car and my trike than I started feeling a few rain drops.  After saying our goodbyes we headed north to the local Sinclair gas station where we bought 67 gallons of diesel at $3.79/gallon to top off the tank.  Diesel will not be this cheap for a couple of months.  This should get us to Spokane with a 1/3rd of a tank, which means we won't have to fuel up again for a couple of months.....yea! 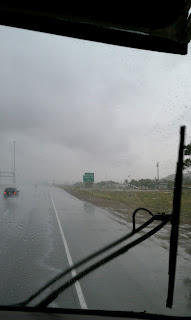 Just as we pulled into the Sinclair station it started raining in earnest.  By the time we poured in 67 gallons of diesel it was pouring, and would pretty much continue on and off at that rate for the next 100 miles.  I am really glad I installed the new windshield wipers when we were at my sister's home in Michigan.  The old ones were making a lot of noise....the new ones are whisper quiet!

Our first stop of the day was at a rest stop north of Ogden, UT where the rain abated for a while, but once we were on the Interstate again.

At last, about 20 miles into Idaho the rain stopped, and the sun came out.    We needed to dump our black tank after 9 days, and the rain stopping just before we came to a Flying J with a dump station was great.....no way was I going to dump the tank in the rain!  It's a good thing we are never in a hurry, because it took forever to fill the black tank with fresh water to flush it out twice.....very low water pressure at the dump station.  I think we were there 45 minutes at least....usually we can dump the tank, flush it twice, and be on our way in 15-20 minutes. 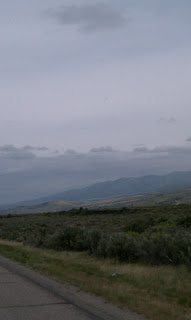 Finally as we entered Idaho the skies began to clear

Our goal for the day was Idaho Falls, Id, about 222 miles north of South Jordan.  We decided to stay at an RV park (Snake River RV Park) we had visited back in November of 2009.  Then it had been snowing for several hours when we pulled into the park that cold November night...we were grateful for 50 amps of power that night as all the heaters were running!  Looks quite different today. 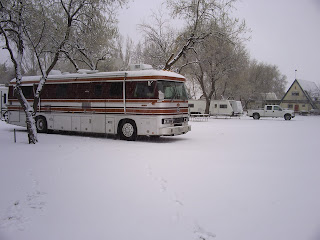 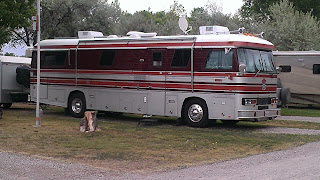 Tomorrow we'll drive the 'Bird up a few miles on the Snake River to investigate a couple of BLM dispersed camping spots where we will stay for a few days.

Posted by Whatsnewell at 7:48 PM