TLE's Perspective - Chapter 6 - What I have changed since the start

Once we started traveling we made further changes.  We purged more items that we were not using and added items we did need but had not brought with us.  Since we had the trailer there were items we put in that we thought we might use.  A three burner Camp Chef with BBQ box and flat griddle was fine for the park or if we were going to be somewhere for longer that a couple of weeks, but we found taking out the smaller Sea-B-Que was easier especially for just the two of us.

We had also decided to carry our Terra Trikes with us along with our two road bikes, Clarke's mountain bike and our tandem.  We found that a lot of the country is just not conducive to riding the trikes (these are three wheel tadpole set up trikes).  After riding them only once we made the decision to leave them along with the BBQ and a few other items in storage.  We also cleaned out more clothes and cupboards and made some donations. 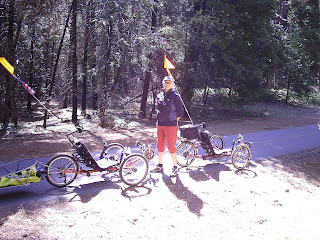 With storage being at a premium I had not brought many baking items with me.  I had not used a lot while in the park -- with the BBQ permanently set up outside we had done a lot of cooking outside.  I added a few more items such as a 1/4 sheet baking sheet, a couple of small mixing bowels, and a glass baking dish.  I do use throw away pans if I need something more  for baking.  These are great for all the pot luck gatherings we have been to.  I also bought a small crockpot.  My daughter had borrowed my bigger one and I just figured she would use it more than me, but once on the road I wanted that option also.

When we were in Vancouver, WA the end of August Clarke had made an electrical faux pas and blew my micro-convection oven.  We were on our way back east to work at Amazon so I suggested not worrying about changing it until we were settle in the park there.  By the time we reached Campbellsville I had gotten so used to living without the microwave, and of course I still had the propane stove, so we just removed the broken one and did not replace it.  We had bought a small teakettle for heating water and I do know how to heat food on top of the stove (we didn't always have microwaves!)  I have a small toaster, my teakettle, induction burner and a fruit bowel in that space now.  I am thinking that I want a small toaster oven, then Clarke can add a shelf above it for storing my induction burner.

Our next major change is going to be removing the sofa and replacing it with a recliner chair for me and and small desk area for Clarke.  We had replaced the club chair across from the sofa with a recliner for Clarke earlier this past year and think that another recliner will work better than the sofa.  I usually sit on the coach with my feet up to keep them out of the aisle, or to watch TV, so we think the space will be work better with another recliner and a desk so Clarke doesn't have to work off a TV table anymore!

Yes we have made adjustment and will probably continue to do so in a small ways, but Clarke and I almost daily look at each other and say, "I can't believe that I still love it and that we are actually doing this !"

Stay tuned for my perspective as we continue out journey...TLE

Posted by Whatsnewell at 6:11 AM