The daytime highs and nighttime lows are getting LOWER......the Friday night/Saturday morning low got into the 30's for the first time.  Typical, however, to SoCal this time of year are a lot of clear blue skies.

Saturday was also NCAA Football 'Rivlary Day' and there were a number of good games that were being watched as I went about taking care of several more tasks involving the maintenance of both the Newell and Beetle.  On the Beetle front three issues had developed simultaneously this past Tuesday......the parking brake light would not go off when I released the brake, the cruise control ceased working, and the AC ceased working.  I tend to view these occurrences in a linear fashion......that they all occurred at the same time seemed to indicate to me they were all related, but in the end only two of them were related, and fixing one (low brake fluid) fixed the other (cruise control).  By the time we had returned from the movie Tuesday I had surmised that the failure of the cruise control was related to the parking brake light staying on when the parking brake was released, but the addition of the AC not working to the mix still made me think there was some burgeoning electrical failure occurring.  Once again my mind leans toward the catastrophic.  I decided to pull out the owners manual for the Beetle to see what a continuous brake light meant, and found that its failure to turn off when the brake was released indicated low brake fluid, so I checked, and sure enough it was low.  Next up was to check the fuse bank to see if any of the three fuses associated with the "comfort system" had blown, and sure enough #5, which controls the AC clutch had blown.  I had no brake fluid, and no 'mini' fuses so I drove one block over to the local NAPA store and bought some DOT 4 brake fluid, and a supply of 5, 7.5, 10 & 15 amp 'mini' fuses.  Right there in the parking lot I added the brake fluid, and installed the replacement 7.5 amp 'mini' fuse.  Upon start up and the release of the parking brake the light went out.....cool.  Then I turned on the AC and it worked.....cool.  On the way home I engaged the cruise control and it worked once again.  So, for the cost of less than $10 I solved all three problems and didn't have to make a trip to my mechanic on Monday.

Next up were two more items on my 'To Do' list for the Newell and they were 1) Vacuum out the dust and lint from the electric heaters in the salon and bedroom, and 2) lube the four window awning rollers, and the patio awning roller.....they have been squeaking a lot when being deployed lately.  I got out my aerosol bottle of white lithium grease and had all of them lubed within 15 minutes.....since all the awnings are currently deployed I didn't have to get a ladder out to reach them.  Then it was a matter of removing the heater grills from each heater and using the shop vacuum to clean out any lint and/or dust.  As it turned out there was very little in either heater, but I'm glad I did it, nevertheless.  A lint/dust build up could result in a fire in the future.  Out of the original 13 'To Do' items I've crossed off 5 in the last few days, and arranged for a 6th to be done (recharge fire extinguishers) in the near future.....I'm on a roll!

By the time I finished with the VW and Newell tasks it was time for the annual cross town UCLA vs. USC game.....this year at the L.A. Coliseum.  It was a close game late into the 3rd quarter, but then USC pulled away to win 40-21, thereby snapping a three game losing streak.  The best game of the day was the Notre Dame vs. Stanford game which came down to the winning 45 yard field goal with a few seconds left by Stanford to win the game 38-36.  There were really no surprises in the rest of the day's games as the favorites all won.

Around 1830 hours we walked down Mission Inn Ave. to the Mission Inn with Sharon, Kate, Nick (son-in-law), Elijah and Charlise (grand kids) to see this year's light display.  The Mission Inn starts putting up their Xmas lights in late September and early October in order to have them ready by the Friday after Thanksgiving, and it always quite crowded the first two nights. 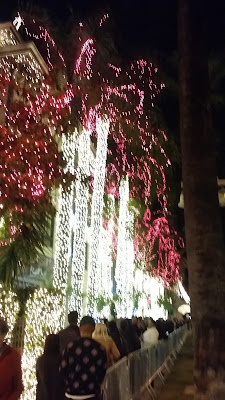 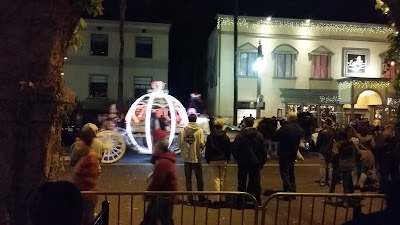 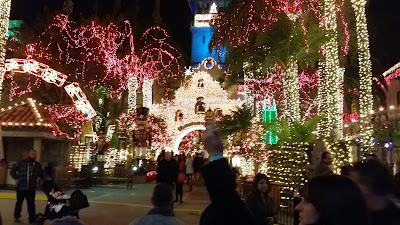 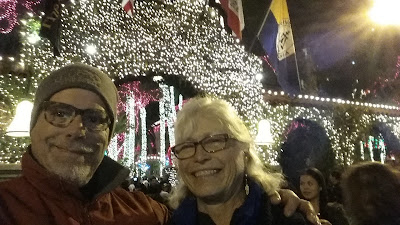 It is getting colder 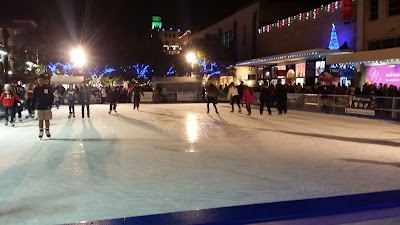 There is even an ice rink

We were back home around 2000 hours enabling me to see the end of the aforementioned Notre Dame vs. Stanford game.  After the game was over we watched a recorded episode of 'Elementary' and then a movie called 'Kingsman: The Secret Service' which we thoroughly enjoyed.  We were in bed by 2430 hours.....