I started off Sunday content to just relax and watch NFL football (Giants at Redskins), but by the beginning of the 3rd quarter it appeared that the Giants were dead in the water having scored zero points, and behind 17-0, so I decided to go out to the trailer and putter around.  After a few minutes I decided to fiddle around with the water regulator and see how hard it was going to be to install the new one.  I already knew I would have to cut a new hole in the floor as the new regulator set up meant the current hole would not work (the hole is on the right side of the regulator (see below where the 90 degree elbow goes through the floor indicated by red arrow) to the city water connection. 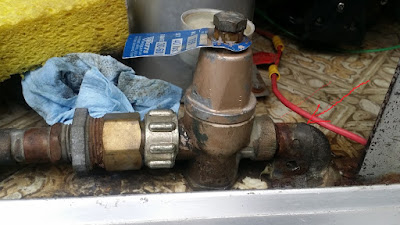 At first I thought I was going to remove the silver bracket upon which the water bay chassis heater is mounted (you can see the bottom of the silver bracket just to the right of the old and new regulators in the pictures below) so I could cut out a piece of it where the new floor hole would be, but it was too difficult to remove so I got out a 'hole saw' I had, marked where the new hole should be, and then cut the new hole...... 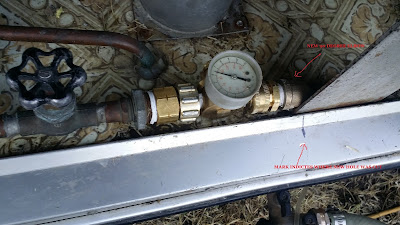 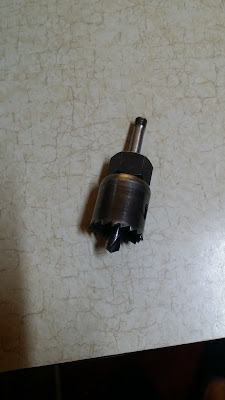 ......mind you, I had not removed any of the old regulator, or its associated plumbing yet....I just wanted to see if I could get the hole cut before I committed myself to removing the old regulator.  Once I began that process there would be no turning back.  Just a side note.....I have had this 1" hole saw for a number of years and have used it several times to cut through wood and steel, and it just keeps cutting.....never seems to get dull. 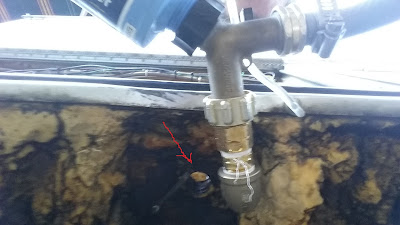 Well, as you can see from the foregoing pictures, I did remove the old regulator, and with a little friendly persuasion, got the new one installed.  When I get into these projects the time just melts away....I had started about 1130, and now it was 1400, and a new NFL game was on the TV......Steelers at Seahawks.....the Giants managed to score 14 points, but lost 20-14 in the end.  So, one more item is crossed off the 'TO DO' list.....time to really relax!

I spent the rest of the afternoon and evening first watching the Steelers/Seahawks game in which the lead changed hands numerous times before the Seahawks finally pulled away winning 39-30.  Then the SNF game on NBC pitting the undefeated Patriots against the Peyton Manning-less Broncos in Denver......in a snow storm.  For much of the game it appeared the Broncos would succumb once again to the Patriots, but in the end the Broncos rallied from behind to win by six in overtime 30-24.....I did not expect that. 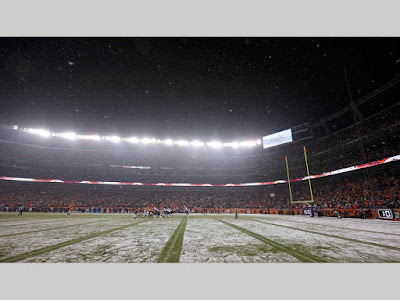 Sunday was a satisfying day......I crossed off another project on the spur of the moment, and watched some great football.....thanks for stopping by!
Posted by Whatsnewell at 8:10 AM