After successfully disarming the alarm system Thursday morning I checked to see how many 'ARRIVALS' were scheduled......89!  That was on top of the Wednesday's total of 69, which is really high for a Wednesday.  Once again the temperature may have broken 54 for the high, and even though the winds from the day before had calmed significantly it was still quite frigid.  After completing my first round of the day I picked up a shovel from the maintenance yard and headed for my site to do some excavating.

About 2 hours after we arrived here at TVC on April 30th one leg of our 50 amp power quit working.  When you plug into a 50 amp outlet you actually are getting 100 amps......there are two 'hot' legs in a 50 amp outlet, each supplying 50 amps.  When one leg is not providing power half my coach has no power......in this case the front heater stopped working, and a few outlets in the rear of the coach.  Initially I thought something was wrong with the front heater, but once I realized other things were not working I surmised there was a problem with the electric pedestal in our site.  My initial solution was to get out my two 50 amp extension cords and plug into the vacant site behind us, which I did......that extra 50 amp extension cord I found at the Salvation Army in Fontana back in April sure came in handy!

A few days later an electrician came to help diagnose the problem.  After a couple of hours of checking each pedestal (sites 426-433) it was determined that the problem was somewhere between site 427 and 429.  The pedestals are all 'daisy chained' together with my site (426) being the end of the line.  As a result both my pedestal and the pedestal in site 427 have a problem with the 50 amp outlet, so the solution is to excavate between 427 and 429, remove the faulty cable and replace it with a new one...... 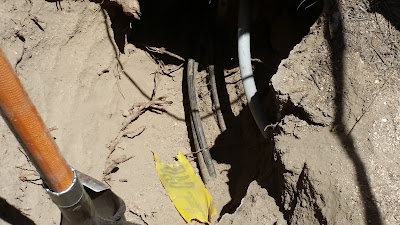 The cables are exposed at site 429 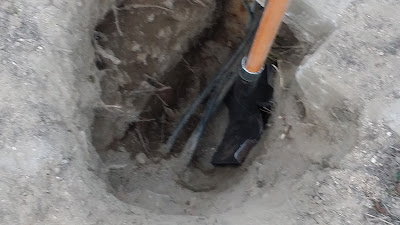 ......the plan was to expose the cables at the base of each pedestal, then reconfirm which cable is bad, then (after turning off the power) pull the bad cable out of the pedestal.   The next step will be to use the new cable (see the cable handing on the pedestal in site 427 in the middle picture above) to jump between both pedestals to confirm that replacing it will solve the problem.  Once that is done, and we have confirmed that power is restored, we will complete the trench between both pedestals, and bury the new cable.  That will most likely happen Friday morning.

As a side note, the electrical contractor gave us a bid of $3,000 to do the work.  That is way too much......the work is all labor....we already have the replacement cable, so we decided to do the work ourselves.......I figure there is about 6 hours of labor at the most, and even if the contractor's per hour labor charges were $100 it shouldn't cost $3,000.

In all I spent about 2 hours doing the initial digging to expose the cables......the rest of the day I spent along the entrance road to the park directing traffic, and avoiding a traffic jam as the 'ARRIVALS' came in bunches at a time.  When I clocked out at 4:24 pm we still had over 40 'ARRIVALS' to go.

I don't really think about being a bachelor, or feel like one until I get home after work and there is no TLE.  Usually I don't do well by myself.....I like being around people, but this time I am enjoying the solitude in the evening.  I sat outside, by myself, smoking a cigar and sipping some single malt for about an hour before heading in for the night.

Game 6 between the NBA finals between the Warriors and Cavaliers was another barn burner with the Cavaliers defeating the Warriors once again to tie the series at 3 games apiece setting up another historic game 7 back in Oakland on Sunday evening.  Seth Curry not only fouled out for the first time since 2013, but was ejected for throwing his mouthpiece at a fan.  Game 7 should have a lot of fireworks......we'll see.

I was in bed by 9:30 thinking about how busy Friday will be......thanks for stopping by!
Posted by Whatsnewell at 3:43 PM