Friday was the precursor for the 4th of July weekend just one week away.......beginning the day we had 200 sites occupied, and with the close to 100 arrivals we will edge towards 300 of the 406 sites occupied.  All of the craziness that typifies the 4th is already beginning to raise its head throughout the morning.  The more crowded it gets the more people begin to park in places that defy the imagination.....places they would never think of parking on a city street, but for some odd reason seems just fine within the confines of TVC.  Many of them create dangerous situations which must be reacted to quickly.

On top of all that we are now right in the middle of the yellow pollen season here at TVC when the pollen falls like a gentle rain 24/7 blanketing everything outdoors, and even manages to worm its way inside......... 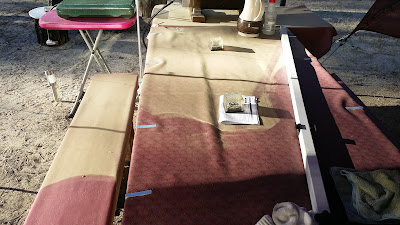 .......red becomes yellow......our gray VW Beetle becomes yellow.  When it is like this even I who has no known allergies begin to sneeze.  Just looking at it makes me feel like I'm going to go into anaphylactic shock........ 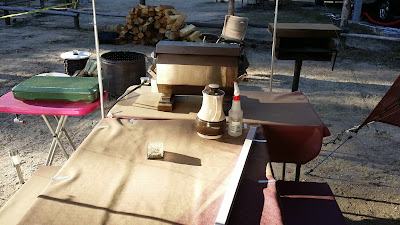 I punched the clock around 7:20 am and headed quickly down to the maintenance/storage yard to retrieve the Ranger Cart and begin my rounds.  For the first time this season I began my rounds without a jacket, or gloves.......the air felt balmy, and the sun delightful.

When things get a little bit crazy I feel right in my element......I spend the better part of my time  directing traffic, helping folks into their sites, answering questions about the park and the local area, making unhappy people happy again.......and that is the main thing about my job, and the jobs of everyone here.  It is inevitable that some will become unhappy about something, and it is our job to put a smile back on their faces.

The day passed quickly, which I like, and I was once again punching that clock just after 4 pm and heading for the barn.  Even though it wasn't our last day of work this week we decided to go out for dinner......it just seemed right.  We drove over to Lake Tahoe Pizza for their salad bar and a pitcher of Icky IPA......a nice way to unwind.  From there we headed for Raley's to pick up a few grocery items (the reason for driving the car) we were running short on......Snap-E-Tom, vodka, bread, half and half, milk, cheese, etc.

We were home by 6 and closing our windows for the first time in a week as the evening temperatures began to fall further than usual, but the forecast for the next week is continued daytime temps in the 80's.

As crazy as the weekend has begun it will pale by comparison to next weekend.....I told the newbies that if they want to imagine what the 4th will look like just multiply this Friday by a factor of three, or four.