Tuesday was packed full of work.......the first task I wanted to get to after completing my first round of the park, and whilst it was still cool, was to get to work connecting the new temporary cable between site 427 and 429 to see if that solved the problem I have written about previously.  With the help of John, my neighbor here, I turned off the power at the main service panel, then using a large allen wrench unscrewed the large lugs that hold the old cable in place at both pedestals.  Once the old cable was removed at each end we inserted the new cable and re-tightened the lugs.  Then the moment of truth was at hand......when I turned the power back on would there be sparks and smoke, or would power be restored?  Well, there were no fireworks, and power was once again restored all the way to my pedestal at 426.....YAY! 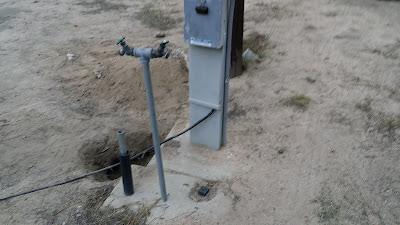 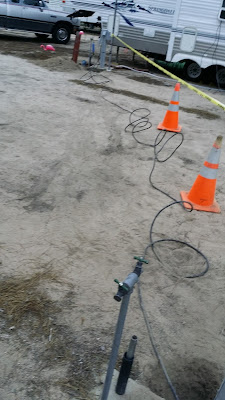 Over the next few days we'll dig the trench between 427 and 429, permanently install the cable in each pedestal, then bury the new cable.  We didn't see any point in digging the ditch until we knew for sure we had properly diagnosed and fixed the problem.  Interestingly our electrical contractor quoted $3,000 to do what I, with a little help from my friends, did for under $100 of labor......so far we have a total of 4 man hours of labor invested with another 3-4 projected to dig the ditch and permanently install the new cable.

After that I installed some more green screen behind our site to discourage campers from walking through our site, which continues to be a problem.  I pumped a lot of propane over the course of the day, kept watch on the entrance when the RV's arriving began to line up, and spent time tightening hundreds of nuts and bolts on the fencing that borders all of our designated walkways.

By the time I finished with that there was just enough time left in my day to make one final round of the park before clocking out.  I was home by 4:30, showered and relaxing in my outdoor recliner by 5 when TLE arrived home.

Thanks for stopping by!
Posted by Whatsnewell at 6:31 AM