7:27 am - Wednesday - November 30th - GNHS - 48° F, 40% humidity, wind 2 mph out of the southwest.....partly cloudy today with a forecast high of 68° F.  On this date in 2017 TLE and I drove into Flagstaff from Desert View (Grand Canyon - worked at the General Store there from November to March) to do a big shopping, and have lunch with TLE's sister, Phyllis at the Lumberyard (a micro brewery, of course).....↴ 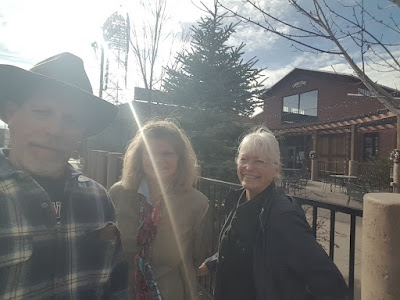 After our whirlwind trip to and from Los Algodones (including a shopping foray in El Centro) we just lazed around Tuesday morning until 11 am when the World Cup match between the USA and Iran began.  The USA had to win to advance out of their pool (B) to the 'Knockout Round'.  The USA did not make the World Cup 4 years ago, so the chance to return, and make it out of pool play is exciting.  Watching the USA play is never an easy thing, and TLE and I were both mentally drained when the whistle signaling fulltime sounded with the USA holding a one to nil lead, thus advancing to the 'Knockout Round'.....WHEW!!
I piddled around a little with the sand rail which entailed hooking up a battery to it to see if the engine would turn over.  The first issue was the ignition system did not respond to 12 volts of DC power, so I had to apply the battery power directly to the starter.  I could hear the Bendix gear engaging, but the engine would not spin, so it is stuck, or seized.  That is not the death sentence it used to be.  I'm going to escalate my efforts by filling each cylinder with ATF (automatic transmission fluid), and then let it soak for a few days before I try again.
Other than that neither of us did much Tuesday, except recover emotionally from the USA v. Iran game.....we're too old for that kind of anxiety....LOL!  TLE lovingly prepared Fajitas for dinner using the Cowboy Wok, and then we played another 'Phase 10' match.  At one point I was 2 phases down, and headed for a humiliating defeat, but then the cards began to fall my way.  In the end I caught TLE with all her cards in her hand 4 times, and rallied to win the match 10 phases to 9.....nice!
We finished the evening with a nice fire, then retired inside to relax before heading off to dreamland once again.  By the way, our Christmas tree is up.....