10:00 am - Monday - Slept in until 9 am this morning.....have been goofing around trying to wipe my old Samsung Galaxy Note 3 clean of all my stuff.  First I have to encrypt my phone so I can then wipe all my data from it permanently, then do a 'factory reset' that erases all my data, then load the phone with 'dummy data' then do another factory reset.....ugggh!  Overnight I downloaded all my photos from the 'CLOUD' to my new phone.....one cool side benefit of downloading them from the 'CLOUD' is that they are now all time stamped and organized in the order of those dates.  It will be much easier for me now to find pictures!  There were over 5,500 pictures.....it only took about 2.5 hours....amazing!  The overnight temp got down to 37, and the inside temp hit a new low at 56!  Ahhh...my kind of sleeping weather!

Below is one last picture of my beloved Samsung Galaxy Note 3......note all the chip marks around the border, and where the glass screen was beginning to delaminate  at the top and bottom.  She was a good phone and made my life easier..... 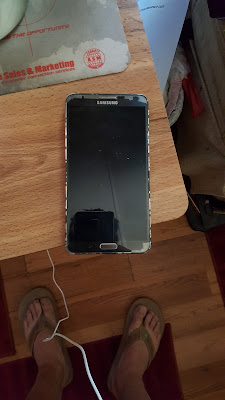 ......and here is the new Samsung Galaxy Note 5, which for a brief time is making my life harder until I figure out all the software changes and nuances. 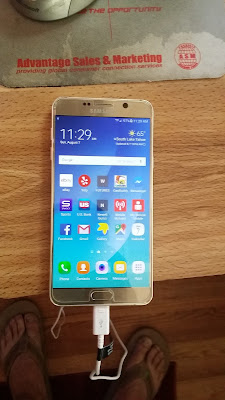 Now that I have lost yet another 2 hours of my life I will never recover it is time to write about Sunday.  Sunday I spent time piddling around in the trailer organizing things better on my work bench, putting away stuff that had accumulated over the last few weeks, and even throwing away some accumulating trash.

We watched some Rio Olympics stuff such as fencing which we found totally fascinating.....an American made it to the medal podium for the first time in decades winning the silver medal.  We watched part of some women's cycling and a soccer match between Germany and South Korea won by South Korea in thrilling fashion.

Soon it was time to report for work, this day at 2:50 pm (3 pm start)......I was immediately embroiled in a problem involving the inability of a customer to back into his site over in Section F.  I was able to redirect the driver and his Class A motorhome and get him into his site within 10 minutes.  Next up we found a couple of people squatting in one of our cabins.....apparently the couple had asked permission to look at the inside of one of our cabins and were left alone by whoever escorted them over....90 minutes later they were still there......I think, and this in my opinion, it was a prostitute and her 'john'.....I'm just sayin'.  We quickly evicted them, and then had to clean the cabin once again.

Within 90 minutes of beginning our shift things, as they often do in the early evening, settled down considerably and the rest of the evening was routine.  We had to call people from two different sites who had left their dogs unattended either outside, or inside their RV/tent.  It is against our rules to leave pets unattended anywhere in your site (inside, or outside your RV/tent).  The dogs, in this case, had been barking for an hour, or so.  The people quickly returned from wherever they were and took charge of their dogs.

We have decided to show movies on Saturday's and Sunday's for the rest of the summer, and we had a good turnout for a Sunday of about 20 people.....mostly kids.....for Kung Fu Panda III.  I had to respond about 10:30 to a site in Section G where people were playing music, and had built a fire ON THE GROUND.  We allow fires in firepits we provide, or if you bring your own, but local ordinances prohibit fires on the ground anywhere in the Tahoe Basin.  Beyond that it was a quiet evening with no other noise complaints.

We clocked out by 11:35 pm and were home relaxing by 11:40.....we watched another Rio Olympic soccer match between Brazil and Iraq which ended in a scoreless tie.....we were in bed by 1 am.

Thanks for stopping by!
Posted by Whatsnewell at 11:35 AM