8:23 am - Thursday - Okay, order is restored.....I went to bed at 11 pm and woke up a few minutes ago.  The early morning chill has returned and I am wearing my slippers, which makes me happy.

It's time for me to reveal what our 'change in course' is as we have made our decision and notified all the parties affected......first let me tell you how this change came about.  I believe I have mentioned previously that we had planned to work for Amazon.com once again, but this time at their Haslet, TX facility, which is quite new, utilizes robotics, and is one of their largest at over 1.5 million square feet.  We planned to arrive there October 27th and work the peak season until just before Christmas when Camperforce folks are normally released (December 22nd, or 23rd).  In our prior to Amazon.com experiences (Campbellsville, KY and Fernley, NV) we had nothing but wonderful experiences, great, timely communication, and no issues getting an RV site.  We always had the approved RV park list by March, or April of the year we were working.  In the case of the Haslet, TX Camperforce people we received confusing and contradictory communications from beginning to end.  Virtually all of our phone calls, and emails had no response.  We did not receive the approved RV park list until just 10 days ago.....in fact no one accepted to work at Haslet got that list until then.  The result was a flood of hundreds phone calls into the various RV parks within just hours of the release of the list.  We began calling the RV parks on the list within literally minutes of receiving the list.  I knew we had to get right on it due to the late distribution of the list.  None of the parks in decent driving distance of the facility (30 miles, or less) we contacted would guaranty us a site due to our arrival date being in late October.  We finally secured a reservation at Finish Line Campgrounds (Texas Motor Speedway) which is only 7 minutes away, and thought we were set.  Then, a week later we got an email from Amazon advising that Finish Line would not open this season at all, and we were back to square one.  By this time all the parks within 30 minutes were booked.

This got us to thinking about staying on at TVC to work through late October/early November.....we talked with our boss, Robert, and he was delighted we were considering staying.  Usually we leave TVC just before, or after Labor Day.  So, in the end we decided to stick with the job we already have, and then spend 6 months traveling before returning to TVC next May.  I think, economically, we will end up at the same place without the 60+ minute round trip commute we would have had at Haslet.....feels like a 'win/win' for us.

We spent several hours watching a few women's Olympic soccer matches (the U.S. women won their first match 2-0 over New Zealand) before heading over to Riva Grill near Stateline for happy hour around 3:30 pm to meet friends from the park (Chuck, Kelly, Will, Sandra, Brad, Joyce, George, Dick, Kevin and Robin).  The specialty drink at Riva (on Ski Run Blvd. across the street from the lake) is called a 'Wet Woody'......a rum based drink which is like an adult 'slushy'.  Most everyone in the group ordered one, except for TLE, who always goes her own way, who ordered a Cosmopolitan....... 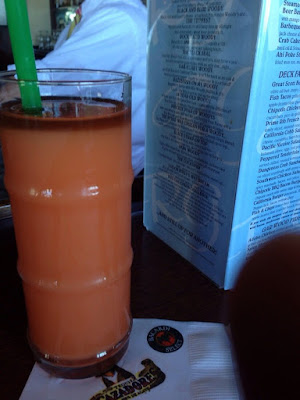 ......we sat talking, laughing and enjoying the view of the lake for some two hours before heading back to TVC.  The folks we spent time with are all customers at TVC....they come every summer just after the 4th of July and leave late September/early October.  We have gotten to know them over the past 3 summers, and now have been included in their weekly 'Happy Hour' adventures......by the way.....I had two of the 'Wet Woodys' and loved them!  By the way, Riva is quite pricey.....4 drinks cost $33, but the company, view and drinks were well worth it. 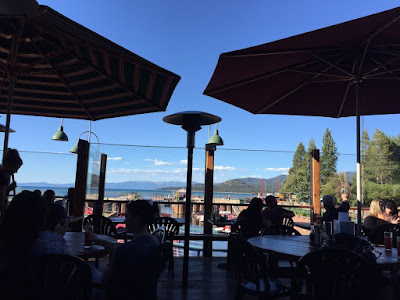 The 'view' from Riva Grill

We arrived back at the coach around 6:15 pm, deployed the outdoor TV, and watched another women's soccer match between France and Columbia which had just started.  By 8 pm when the match ended the mosquitoes were beginning to bother us, so we headed in for the night to watch the current episode of Masterchef' before retiring for the evening around 11 pm.

Thanks for stopping by!
Posted by Whatsnewell at 9:31 AM